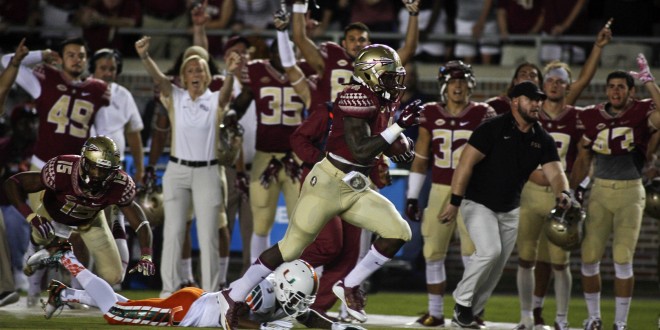 The 2016 FSU spring football game will be this Saturday.

The annual Garnet and Gold game will feature most of the Seminoles that have been practicing since spring practice began on March 16. One noticeable player that will not play is running back Dalvin Cook. Head coach Jimbo Fisher announced Wednesday that Cook had undergone surgery on his right shoulder. He is expected to be back for fall camp in August.

With the absence of Cook, the backfield will be helmed by sophomore Jacques Patrick. Seniors Ryan Green and Mario Pender are also expected to get some time at running back.

Quarterback Sean Maguire is still sidelined from ankle surgery and will be until June. Deondre Francois, a redshirt freshman who was rated as the top dual-threat quarterback in the high school class of 2015, has been getting the most reps during spring practice and is expected to start on Saturday.

At the defensive end, FSU lost many starters to graduation or the NFL. At the linebacker position, look for big things from starters Ro’Derrick Hoskins and Matthew Thomas, who is returning from a year-long suspension. Trey Marshall will start alongside Derwin James at safety. James is expected to fill the shoes of top NFL prospect Jalen Ramsey.

This year’s game will not be held at Doak Campbell Stadium this year. Instead it will be at the Citrus Bowl in Orlando. The change of venue is due to the reconstruction the ‘Doak’ has been undergoing since the Seminoles played their final home game of the 2015 season. Fisher is happy his team will get the chance to play in Orlando.

The game is set to kick off at 3 p.m. on Saturday.