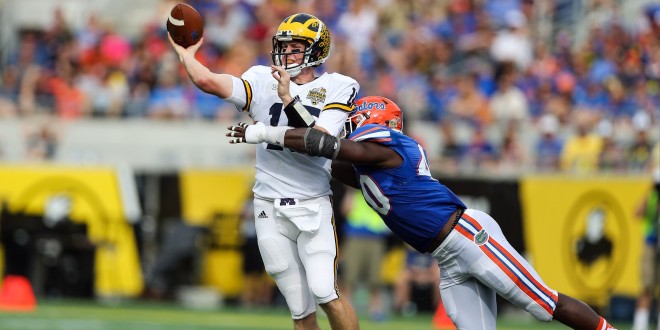 Florida Linebackers Ready to Live Up to Expectations

After a three month college football drought, Friday night’s Orange and Blue game gives fans their first real glimpse of the 2016 Gator roster that’ll look to improve upon the surprise 10-4 (7-1, SEC) team that took the SEC by storm early before slowly fading.

While the return of football, if even for a fleeting moment, is a happy moment for many, it will also be bittersweet because it will dawn on some that certain standout stars are no longer on the team. Chief among the positions missing some big names is the linebackers.

The most significant name missing from the group is Antonio Morrison. Morrison’s final season left a lasting impression on opposing offenses as the 6-foot-1, 229-pound linebacker racked up a team-leading 103 tackles en route to his second AP Second-Team All-SEC award. Linebackers coach Randy Shannon said Morrison brought much more to the team than his on-field performance. Who’s left to fill the void left by Morrison? It starts with Jarrad Davis.

Davis triumphantly announced his return to Florida in January, opting to help his team in what will be his senior season. Davis, a somewhat forgotten prospect in a star-studded 2013 linebackers class, has arguably been the most productive of the bunch. He recorded 98 tackles last season — five fewer than Morrison — in a breakout season. Much like Morrison, Davis is expected to shoulder the burden of being the leader of his position. He’s made 14 starts in his career. The rest of the current linebackers? Four. Shannon knows how vital he’ll be to the team because of that experience.

Despite the relative inexperience of linebackers not named Jarrad Davis, there is still plenty of promise left in the position. Senior Alex Anzalone is expected to be another one of the starters. One of the more promising players on the team, Florida tabbed Anzalone to be a starter last season. He started the first two games and recorded six tackles, but suffered a shoulder injury that knocked him out the rest of the year. He’s been limited to non-contact drills this spring, according to Shannon.

Florida can repeat 2015 and run with two primary linebackers, but it becomes a risky plan because of Anzalone’s injury. Florida will be looking for depth behind Davis and Anzalone and that’s where others like senior Daniel McMillian, redshirt junior Matt Rolin and even freshman David Reese are expected to step up. McMillian played as a reserve linebacker last season, recording a career high 23 tackles. Rolin appeared in three games (two starts) and recorded two tackles. Reese, a three-star linebacker from Michigan, has made big strides in spring, according to Shannon.

The position may not be as fortified as it was one year ago, but the enough pieces are in place to ensure it’s a strength and not a weakness. The Orange and Blue game kicks off at 7 p.m. and will be televised on the SEC Network.