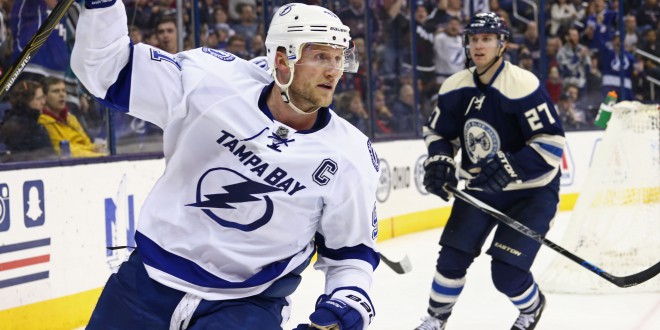 The Lightning went into New Jersey last night with one goal in mind—win and clinch. After a 4-2 victory over the Devils, the Tampa Bay Lightning have clinched home-ice advantage for the first round of the NHL playoffs. The win brought the Lightning’s record to 46-30-5 with 97 points, just four points behind the Florida Panthers for first place in the Atlantic division.

The Lightning started the game off with a goal by Erik Condra assisted by Andrej Sustr and Brian Boyle five minutes and 45 seconds into the first period. In the second period, the Devils knotted the game at one with a goal by Sergey Kalinin. Tampa Bay couldn’t be contained for long, as they game back seven minutes later with a goal by Cedric Paquette.

In the third period, the Lightning looked to put the Devils away. After a goal by Jonathan Druin less than four minutes into the period, home-ice advantage was in sight.

The Devils wouldn’t go away quietly as Kalinin netted his second goal of the night with just over 10 minutes left in the game, making the score 3-2.

The next 10 minutes lead to a back and forth fight for possession as the Devils desperately tried to tie the game while the Lightning kept coming close to delivering the final blow. Fortunately for the Lightning, they were finally able to break through with a goal by Valtteri Filppula and put the game on ice.

Looking forward, the Lighting head to Montreal to take on the Canadiens Saturday night at 7 p.m. The Canadiens are coming off a win at Carolina against the Hurricanes Thursday. The Canadiens have not had the most successful season, as they stand at 37-38-6 and are in sixth place in the Atlantic Division.