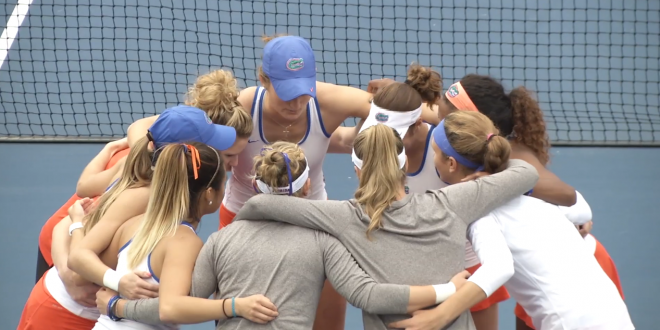 The Florida women’s tennis team will complete their regular season on the road starting Friday evening at 6 p.m.

Last Saturday they finished their regular home game schedule undefeated at the Alfred A. Ring Tennis Complex when they defeated Texas A&M.

On Friday the No.6 ranked Florida women’s tennis team will face the Crimson Tide. This will be the start of a four match away stretch for the Gators. Alabama has’t won a single contest in SEC play as they are 0-9, while the Gators are still undefeated in the SEC and are 9-0. Florida dominates this series against Alabama with a  39-1 record.

“Alabama has been struggling a little this year, they’re always pretty good and they’re obviously going to come out and play tough against us.” Head Women’s tennis coach Roland Thornqvist said.

The last time the Gators faced Alabama, the Crimson Tide were ranked ninth in the country. On Feb. 28, 2015 the Gators dropped the doubles point but grabbed four singles points from Brooke Austin, Josie Kuhlman, Kourtney Keegan, and Belinda Woolcock securing the win.

Later on the Gators will travel further east in the state of Alabama to take on the Auburn Tigers. Auburn is currently ranked No. 13 in the country. Coach Thornqvist is aware of how well Auburn has played this season.

The match start time for the Gators against the Crimson Tide is at 6 p.m. on Friday and they will face Auburn at 2 p.m. on Sunday.