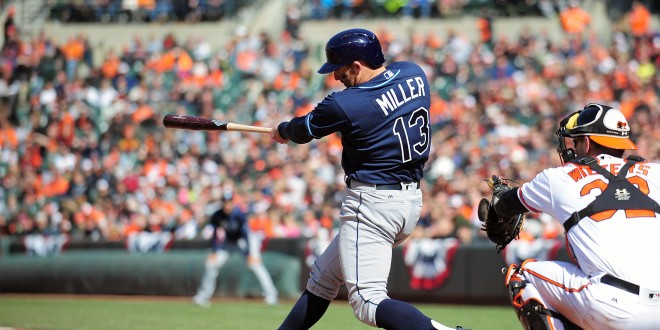 Rays Off to Slow Start this Season

The Tampa Bay Rays haven’t gotten off to the start they wanted to so far this season. Tampa Bay is currently 2-4 to start in 2016 despite not giving up more than six runs in any contest.

Tampa Bay’s last loss comes at the hands of the Baltimore Orioles, who have started the season 5-0, on Sunday afternoon. The Orioles took down the Rays 5-3 taking the series 2-0 after game two was postponed due to weather. The Rays pitching has been solid this year as well, but the offense hasn’t been able to produce enough runs to get wins.

In the Rays most recent loss, Jake Odorizzi threw four scoreless innings and had one bad inning giving up five runs including a two-run homer to Manny Machado. Manager Kevin Cash says the offense needs to get more runs early in the game to help out the pitching.

Tampa Bay has scored three runs or less in five games this season and will have to increase their run production if they want to have a solid season.

Up next the Rays welcome the Indians to the Trop for a three game series starting tomorrow night. Matt Moore (0-0, 5.40) makes his second start of the season and will take on Cleveland ace Corey Kluber (0-1, 6.75) in game one of the series. First pitch is set for 7:10 p.m. but you can catch coverage of the game on ESPN Gainesville 95.3 FM starting at 6:30 p.m.

Im a senior at the University of Florida currently pursuing a degree in Telecommunications. I work for ESPN Gainesville 95.3 and anchor the Monday sports broadcast for WUFT First At Five. Im from New York and an avid sports fan of all New York teams.
Previous Spieth Stumbles, Danny Willett Rises to Ocassion at 2016 Masters
Next No. 2 Gator Softball Sweeps Ole Miss