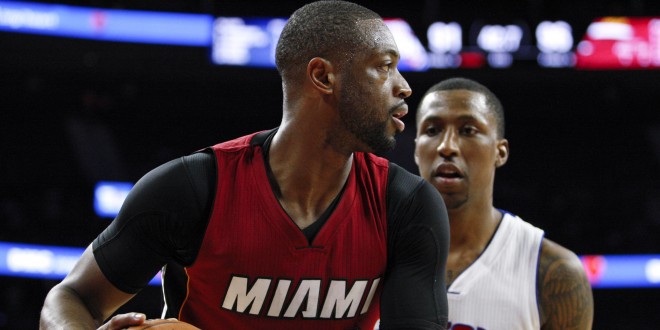 Heat Win on the Road, Look to Claim No. 3 Seed

Faced with a crucial road trip to end the season, the Miami Heat took a big step towards making it a successful one, as they pulled out a 99-93 win in Auburn Hills against the Detroit Pistons.

Joe Johnson scored a game-high 25 points, Luol Deng had a double-double with 17 points and 10 rebounds, and Hassan Whiteside added three blocks in a win that now has Miami in pole position for the No. 3 seed in the Eastern Conference and the Southeast Division title.

Dwyane Wade recognized the importance of the win, saying that getting an important road win will prepare the team well for the playoffs, when they may be “desperate” for a win.

Joe Johnson’s big fourth quarter helped to put away a Pistons team that kept hanging around, as they were also fighting for playoff seeding. Johnson checked in for Wade with 6:13 left in the fourth quarter and the Heat clinging to a two-point lead. Johnson went on to score 15 of the team’s final 20 points, including three shots from beyond the arc, with one of them a 25-foot dagger that gave the Heat a seven point lead with 46 seconds left.

Take a look back at his monster 4th quarter.https://t.co/FkjBV91Dn8

Johnson said the Heat were able to “impose our will” over those last six minutes of the game.

The Heat will now quickly turn their attention to the Celtics, as Miami travels to Boston to face them in the last game of the regular season and the second game of the current road trip. Miami will look to avoid any fatigue associated with the second game of a back-to-back on the road, as the game has playoff implications for both teams.

Boston currently holds the No. 5 seed in the East, but sit only one game back of Miami and Atlanta. A win for the Celtics, and they would get a top four seed, which means they would have home court advantage for their first round series. A win for Miami, and they clinch both their division and the No. 3 seed, giving them home court advantage for their first round match-up and the added benefit of avoiding the top seeded Cleveland Cavaliers until the Eastern Conference Finals, should the top four teams all move on past the first round.

Boston comes in having lost their last two games, but lead the season series against Miami 2-0.