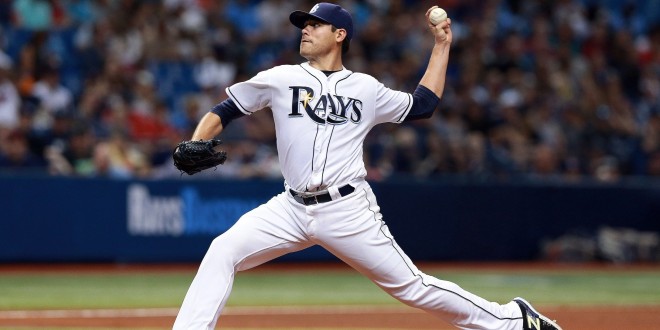 While it was only Matt Moore’s second start of the season, the pitcher from Fort Walton Beach, Florida was in full midseason form Tuesday night.

The 2013 All-Star allowed one run in seven innings of work in Tampa Bay’s series opener against the Cleveland Indians, leading the Rays to a 5-1 victory at Tropicana Field. Moore, who earned a no-decision in the outing, pounded the strike zone against a struggling Indians lineup, walking only one batter while striking out five. Moore’s stellar performance lowered his ERA down to 3.00 on the year.

The Rays were unable to get on the board early on after Indians pitcher Corey Kluber got off to a great start of his own, allowing only three baserunners and zero runs through the first six frames of the contest. The right-hander would lose steam in the seventh however, after designated hitter Corey Dickerson and left fielder Desmond Jennings orchestrated a two-out rally to get Tampa Bay their first run of the game.

Facing a full-count, Dickerson roped a double to left field off Kluber for the Rays first extra base hit of the night. Jennings then singled to left field to drive in Dickerson and tie the game at 1-1.

After Xavier Cedeno relieved Moore and pitched a perfect top of the eighth, Tampa Bay got another offensive jolt from second baseman Logan Forsythe and third baseman Evan Longoria.

With two outs and a runner on second base, Forsythe socked a line drive home run to center field to give the Rays a two-run lead and chase Kluber from the game. Following the game, the second baseman said he was simply trying to put a ball in play.

Longoria then followed suit, drilling another two-run bomb later in the inning against Cleveland reliever Cody Allen to give Tampa Bay a 5-1 lead.

The Rays are averaging 3.3 runs per game through their first seven games this year, 0.7 runs lower than their season average last season. Still, Longoria says that he is excited from what he’s seen out of his club so far in 2016.

The Rays and Indians continue play on Wednesday at 7:10 p.m. Drew Smyly is expected to start for Tampa Bay and Carlos Carrasco is set to start for Cleveland.

Previous Marlins Defeat Mets in Second Game of Series, 2-1
Next Heat Win on the Road, Look to Claim No. 3 Seed