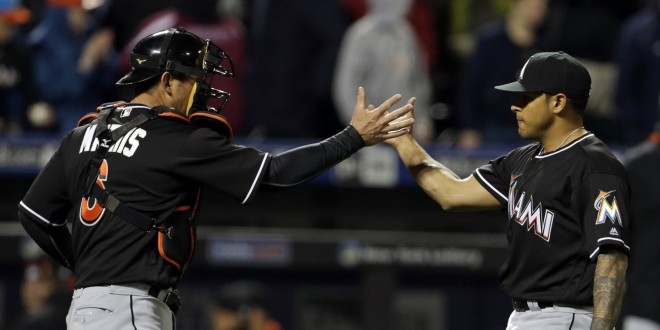 Preview: Marlins Open Up Series Against Braves in Miami

The Miami Marlins face off against the Atlanta Braves in Miami on Friday night at 7:10 p.m. in the first game of a three-game series between the division rivals. Wei-Yin Chen (0-0, 9.00 ERA) will square off against Williams Perez (0-0, 7.71 ERA) in a matchup of pitchers who both struggled in their first outings this season. In Chen’s first start, he gave up five earned runs in five innings pitched, while Perez gave up four earned runs and a homer in 4.2 innings pitched. Against current Marlins players, Perez has pitched 19 at-bats, giving up eight hits, two doubles and no home runs. Chen has thrown 47 at-bats against current Braves players, giving up a batting average of .255, allowing only 12 hits. Tom Koehler (MIA) and Bud Norris (ATL) are the projected starters for Saturday’s game at 7:10 p.m., with Jarred Cosart (MIA) and Jhoulys Chacin (ATL) expected to face off on Sunday at 1:10 p.m.

Christian Yelich, Dee Gordon and Giancarlo Stanton have all been important offensively for the fish to start the season. Yelich currently has a 1.140 OPS while batting.391  with two doubles and one home run. Gordon has added two doubles and two triples thus far, batting .314, while Stanton continues to pack a powerful punch with two home runs and six RBI.

Nick Markakis has been the Braves’ only offensive stud in his second year with the team, as Atlanta ranks 27th out of 30 teams in team batting average. Markakis is batting .303 with seven doubles and eight RBI. No other batter besides Adonis Garcia is hitting above .300. The team’s offensive woes have led to an 0-9 start to the season.

The only game available on cable in this three-game series is Sunday’s contest at 1:10 p.m. That game can be seen on Fox Sports Florida in the Gainesville area. The rest of the games require the MLB TV package, or can be streamed (audio only) through either of the team’s radio providers.

Join us tonight as we pay tribute to Jackie Robinson. Tickets: https://t.co/v3GlUJuiL1#Jackie42 pic.twitter.com/QQkykmyyn9