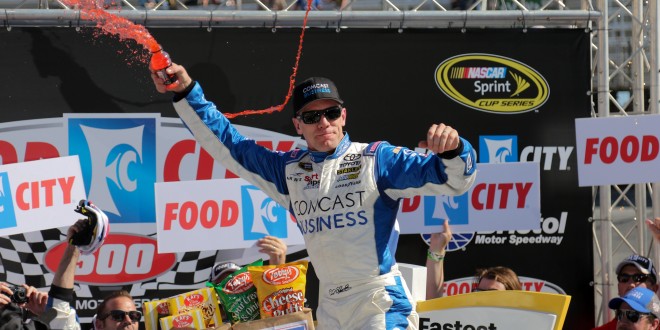 After starting at the pole position, Carl Edwards led 276 of 500 laps at the Bristol Motor Speedway Sunday on his way to victory lane.

Edwards beat runner-up Dale Earnhardt Jr. to the finish line by .766 seconds, and cruised to victory with the fastest car so far in the NASCAR Sprint Cup Series. With the victory Edwards all but clinched a spot in the Chase for the NASCAR Sprint Cup, and he was very excited to gain his first win of the season.

Edwards credited his pit crew afterwards for an almost flawless performance, on his way to his seventh top 10 finish in eight races.

As smooth as Edwards’ race may have been, the drivers behind him had anything but a smooth sailing in Bristol. The drivers suffered a number of issues, leading to the top 10 being littered with unlikely names. Matt DiBenedetto (sixth), Trevor Bayne (fifth), and Rookie of the Year candidate Chase Elliot (fourth) all wound up in the top 10.

Current NASCAR Sprint Cup Series leader Kevin Harvick finished in seventh place, and is now only one point ahead of the second place Edwards who jumped up two spots following Sunday’s win.

The next event on the NASCAR Sprint Cup Series schedule will take place on Sunday, April 24 at 1:00 p.m. in the form of the Toyota Owners 400 from the Richmond International Raceway.