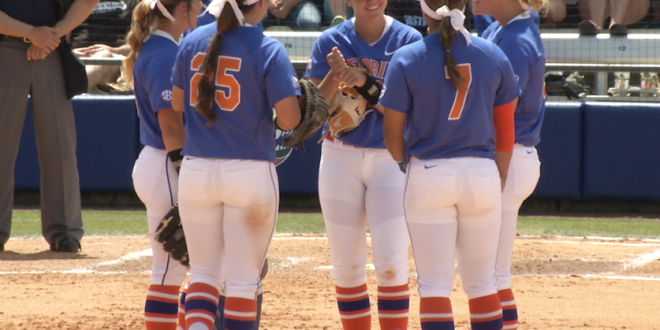 The Florida Gator softball team is 41-3 after this weekend’s three game homestead against the University of Louisiana at Lafayette (32-6). The Gators wrapped up the weekend sweep with a 3-0 victory over ULL and Delanie Gourley earned the win for Florida after striking out eight batters in four innings.

Kelly Barnhill started in the circle for Florida, she walked two batters to start the first inning but also added two strikeouts to leave those runners on base.

In the top of the second, Sara Corbello was the first Cajun to get on base by way of a single to left field. A walk from Barnhill loaded first and second, before the freshman pitcher made a rare unassisted triple play. The Gators responded in the second when Nicole DeWitt had a line drive single to center field. Janell Wheaton also added a single before an Aubree Munro single scored Florida’s first two runs.

Munro says everything was going her way this weekend.

In the top of the third Cajun LF Shellie Landry notched a two out double. Kelsey Vincent added a single for the Cajuns which loaded the corners. A walk from Barnhill loaded all three bases, prompting Coach Tim Walton to make a change in the circle. Delanie Gourley came out in the knick of time for Florida, striking out the first batter she faced and ending Louisiana-Lafayette’s third inning.

A Rajin’ Cajun error helped Kirsti Merritt advance to second base to start the bottom of the third. Kvistad walked for Florida before a Nicole DeWitt single sent Merritt in for the score, making the lead 3-0.

Delanie Gourley added two additional strikeouts in the fourth inning. Aubree Munro earned a two-out double in the bottom half of the inning but was ultimately left on base. Gourley got another pair of strikeouts to end the Cajuns’ fifth. Florida’s defense took care of business in the sixth which left ULL with one more inning to get three scores on the board.

Florida softball will be back at home against the USF Bulls on Wednesday with first pitch set for 6 p.m.