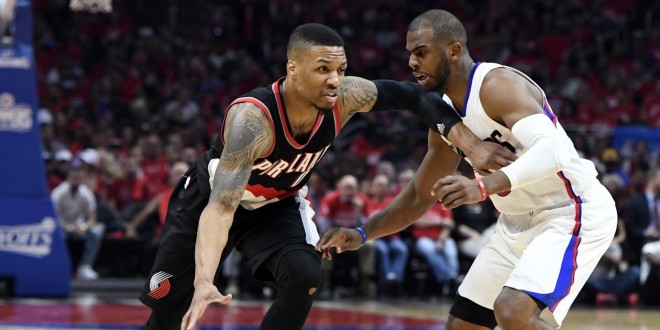 Dwyane Wade and Hassan Whiteside led the way for Miami as the Heat defeated the Charlotte Hornets 115-103. Wade scored 28 points with eight assists, while Whiteside had his second consecutive double-double to start the playoffs with 17 points and 13 rebounds. In 30 minutes of action, he was perfect from the field going 8-for-8 and setting a franchise playoff record.  Charlotte early on in the game looked like a team that was trying to even up the series at one game apiece. Kemba Walker came out shooting from the start as he had 11 points at the end of the first quarter with the score tied up at 29. Jeremy Lin and Cody Zeller contributed in the first quarter as Lin scored eight of his 11 points in the quarter while Zeller had 7 of his 8 points. However, the Heat responded in the second quarter.  The score tied at 47 points with 4:48 remaining before halftime Miami  end the quarter on a 25-13 run to lead at the half 72-60, even though Kemba Walker had 21 of his 29 points in the first half, while Al Jefferson had 16 of his 25 points in the second quarter alone.  After halftime it was the Hornets that show they still have a little fight left in them in the third with a mini run of their own to cut the lead down to eight midway through the third, but it wasn’t enough as Miami got the lead up to 13 to end the quarter 91-78. Whiteside after the quarter finished had 17 points, 12 rebounds and two blocks.  The Hornets however wouldn’t go down without one last attempt to steal a victory on the road. The closest Charlotte cut the lead down to was seven points with less than three minutes to go in the game. The story of the game was that Charlotte’s three point shooting or lack thereof. The Hornets went 1-15 from 3 for an abysmal percentage of 6.7%, while the Heat went 9-16 from three with a percentage of 56.3%. Another stat the Hornets want to correct in Game 3 is the fastbreak points, which was 15-1 in favor of the Heat.  Miami have a series lead of 2-0. Game 3 is on Saturday in Charlotte at 5:30 p.m. on TNT.

LeBron James scored 27 points, three steals and three assists to help the Cleveland Cavaliers defeat the Detroit Pistons 107-90 and now lead the series 2-0. If though LeBron led all scoring, it was Kyrie Irving, who started off hot as he scored 13 of the Cavs’ 15 points to start the game off, but Detroit came to play and the Pistons actually led after the first quarter 28-23. The second quarter was basically a street race with both teams going up and down the court and each having their own mini run, which including this LeBron duke halfway through the second.

At the half, however Cleveland reclaimed the led from Detroit and led by two with the score at 55-53. LeBron at halftime had 16 of his 27 points, while JR Smith added 15 points and Kyrie Irving had 13 points from the first quarter. Kevin Love also had a great game as he finished with a double-double at 16 points and 10 rebounds. Cavs started to pull away toward the end of the third quarter, when LeBron hit a 3 to push the lead to 8 with less than 4 minutes remaining in the quarter.  Cleveland led 82-68 heading into the fourth quarter. Pistons tried to make no final push for a chance to steal Game 2 and go back to Detroit with the series tied at one, but the Cavs weren’t having any of that as Cleveland started the quarter hot and eliminated any hope the Pistons had of winning the game.  Cavs went to win the game 107-90. Kyrie Irving finished the game with 22 points and four assists, while JR Smith added 21 points, five rebounds and went 7-for-11 from three-pointers for the contest. The Cavs tied the NBA postseason record for 3s with Golden State (2015), Dallas (2011) and Seattle (1996) with 20 3s being made. The series moves to Detroit now as Cleveland lead 2 games to 0 as Game 3 is on Friday and tip-off is set for 7 pm on ESPN.

The Los Angeles Clippers had no problems dispatching the Portland Trail Blazers by 21 points as the Clippers won the game 102-81 as LA leads the series 2-0. Chris Paul led not only the Clippers in scoring with 25 points, but led all scorers on the night. JJ Redick added 17 points; Blake Griffin had 12 points, nine rebounds and four assists, while DeAndre Jordan grabbed 18 rebounds and managed three points. To start the game it was very defensive side game in the first quarter as the Clippers led 22-17 at the end of the first quarter and in the second quarter the game became more wide open as both teams scored more than 25 points as Portland won the quarter 26-25, but were still trailing 47-43 at the half. After halftime, the game went from wide open back to a defensive style game as LA won the quarter 20 to 18 heading into the fourth quarter leading by six as the score is 67-61. The Clippers saved their best for last as LA scored 35 points in the fourth quarter and held Portland to 20 points in the fourth to blowout the Trail Blazers by 21 points.  Damian Lillard finished the game with 17 points and CJ McCollum added another 16 points.