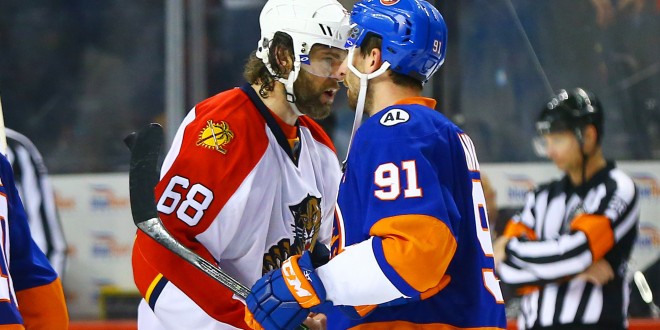 After their most successful regular season in franchise history, the Florida Panthers’ season came to an end at the hands of the New York Islanders in six games.

The Panthers, winners of the Atlantic Division, played a very intense and hard-fought series against the Islanders. Three games went to overtime including Game 5 and Game 6 which both went into double overtime. In Game Six, the Panthers were up 1-0 for the majority of the game until Islanders captain John Tavares scored the tying goal with just under a minute remaining in regulation. Both teams missed several opportunities to end the game in the overtime periods until Tavares scored the winning goal in double overtime to give the Islanders the 2-1 win. With the victory, the Islanders clinched their first playoff series win in 23 years. They will take on the Tampa Bay Lightning in the second round.

Panthers right winger Jaromir Jagr is not sure what his future holds but he knows that if he comes back, he has to be more ready.

Panthers head coach Gerard Gallant was disappointed that his team was eliminated but he was not disappointed in any of his players.

Watch Gerard Gallant's press conference after the @FlaPanthers were eliminated from the playoffs by the Islanders.https://t.co/0LAdMg4jYs

Panthers goalie Roberto Luongo finished the series with a 2.05 GAA and a .934 save percentage.

The Islanders and the Lightning second round playoff game has yet to be scheduled.