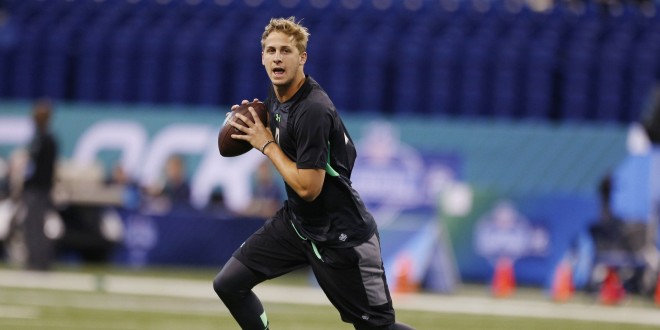 The 2016 NFL Draft begins Thursday and with it brings another weekend where all teams and its fanbases await the chance at drafting the next big superstar.

No draft conversation can begin without touching upon the first two picks of the NFL draft, held by the Los Angeles Rams and Philadelphia Eagles respectively. Each of these teams made big pushes when they traded up for their picks earlier in the month. Their sights are set on two quarterbacks—California’s Jared Goff and North Dakota State’s Carson Wentz.

Goff, expected to go first overall, started every game for California over the last three years, and set school records with 977 completions, 12,220 yards passing and 96 touchdown passes. Wentz, meanwhile, led NDSU to their fifth straight FCS title in his senior year. While there have been questions raised about drafting an FCS quarterback, former NFL receiver and current NFL broadcaster Cris Collinsworth says Wentz’s 6-foot-5, 235-pound frame gives him a leg up over other QBs in the draft.

The big day is finally here. Excited for what the future holds. #DraftDay

As a kid, I wrote that I wanted to be a professional football player someday… Today, that becomes reality. #blessed #thankful #AO1

After those two are off the board, the San Diego Chargers, Dallas Cowboys and Jacksonville Jaguars round out the top five. Where as the first two picks are virtual certainties, here’s where the fun begins. NFL mock drafts from various outlets have the Chargers drafting anyone from FSU CB Jalen Ramsey, Oregon DE DeForest Buckner, Ole Miss OT Laremy Tunsil, or even Notre Dame OT Ronnie Stanley. That group of names is expected to make up picks 3-7, with Ohio State DE Joey Bosa also in the mix. At No. 4, Cowboys owner and GM Jerry Jones is ruling out drafting a running back, and head coach Jason Garrett likes the multitude of options available later in the draft.

While the Jaguars are projected to take someone on defense, the remaining two Florida teams, the Miami Dolphins and Tampa Bay Buccaneers, can go either way. The Bucs hold the number nine pick and are currently leaning defense. Several mocks have them taking Florida CB Vernon Hargreaves III with the ninth pick. While they don’t have a major need for cornerback, Tampa has an aging Brent Grimes, and inconsistent play from Johnthan Banks and Alterraun Verner, all justifiable reasons to take Hargreaves.

The Miami Dolphins might be the hardest team to peg from the sunshine state. Many projections have them trading up from their 13th overall pick to snag OSU RB Ezekiel Elliot. After Lamar Miller left to Houston via free agency, the Dolphins are left with Jay Ajayi and Damien Williams leading the pack. Elliot says above all he wants to join a playoff caliber team. If they skip out on Elliot, there’s rumblings that they’d take Hargreaves.

Suffice to say Hargreaves is a first-round lock, and he’ll be Florida’s first player in the first round since 2010 when Joe Haden, Tim Tebow and Maurkice Pouncey were selected. Safety Keanu Neal is another Gator who can go in the first round. ESPN’s Todd McShay pegged the Atlanta Falcons to take him at No. 17. Defensive end Jonathan Bullard is a fringe first-round pick as well. In the same mock, the Arizona Cardinals take him at No. 29.

Excited to watch dreams come true over the next few days. Really proud of all our guys! #GatorMade #NFLDraft2016 pic.twitter.com/vIJyVwxJVO

Coverage of the first round of the NFL Draft begins at 7 p.m. on ESPN Gainesville 95.3 FM.

Rounds 2-3 begin Friday at 7 p.m. and the remaining rounds (4-7) begin Saturday at noon and can all be watched on ESPN.

@EddyAlmaguer
Previous NFL Draft Day: Keanu Neal Projected to 1st Round
Next No. 1 Gator Softball Prepares for No. 18 Aggies