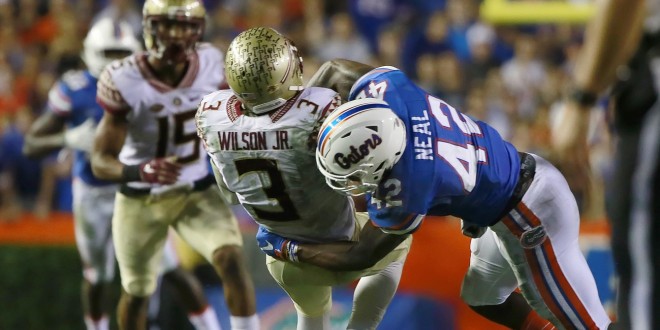 The 2016 NFL Draft is tonight. 25 players will be there, in Chicago, to hear their names called and walk up on the stage to greet NFL commissioner Roger Goodell. Keanu Neal is hoping to be one of those players as he waits in the ominous green room.

Neal is the top strong safety in the draft. He is projected to go late in the first round or sometime in the second round. His large hands and athletic frame make him a potential starter in his rookie season, depending on which team drafts him.

Draft day!! out of my hands.. Wherever I land, it's due to His plan for my life

After missing the first two games of the season for the Gators, Neal still managed to have the third-most tackles on the team with 96. He has been a key factor for the Florida defense and special teams since he came in as a freshman. Neal opted out of his senior year to pursue his dream of playing in the NFL.

Since all the training days and meetings are over, Neal is not sure where he will go, but a lot of teams are interested in him. He is excited to begin proving all of those people that do not think he has what it takes wrong.

Excited to watch dreams come true over the next few days. Really proud of all our guys! #GatorMade #NFLDraft2016 pic.twitter.com/vIJyVwxJVO

The NFL Draft will air on ESPN and the NFL Network tonight at 8 p.m. The second round will be Friday night, starting at 7 p.m., on ESPN as well. You can hear live coverage of the draft on ESPN Gainesville 95.3 FM as well starting at 7 p.m. tonight.