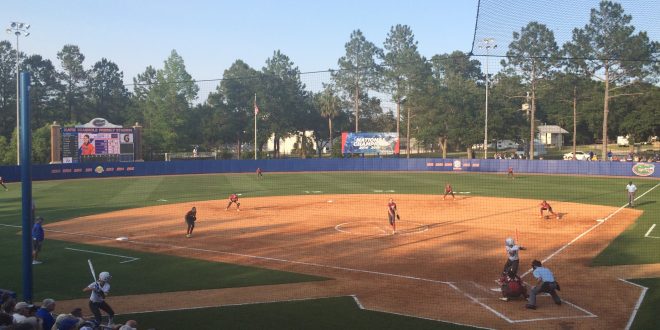 Though Senior Day isn’t officially until Saturday, Friday night was all about Florida’s seniors. The Gator seniors shone Friday night as the top-ranked Florida  softball team (50-3) defeated the Arkansas Razorbacks (17-37) 9-0 to take the first game of the series against the Razorbacks. Seniors Kelsey Stewart, Kirsti Merritt and Taylore Fuller all recorded home runs during the victory.

The Gators jumped on the board early, scoring three runs in the bottom of the first. Stewart scored first off a RBI from Kayli Kvistad. Moments later, freshman Amanda Lorenz added her own run off an RBI from Merritt. Kvistad scored the inning’s final run on a double steal.

The Gators continued the scoring trend in the bottom of the second, as Stewart scored yet again, blasting a home run to right to give the Gators a 4-0 lead.

Both teams were held scoreless in the next two innings, but the Gators took off in the fifth, scoring five runs. Merritt scored the first run of the inning with a home run and Nicole DeWitt then scored off an RBI from Janell Wheaton. Fuller finished with a three-run homer, her eighth home run of the season, and the Gators defeated the Razorbacks 9-0 in five innings.

Though the spotlight was on Florida’s offense Friday night, the Gator pitching was strong as well. Pitcher Aleshia Ocasio finished in the circle allowing no runs while giving up three hits and striking out five batters.

The Gators will be going for the series win on Saturday versus the Razorbacks at 1:00 p.m. Florida’s seniors will be honored in a ceremony before the game.

Junior telecommunication student at the University of Florida. Passionate about all things related to sports.
@@EllenBazley
Previous Brandone Francis-Ramirez to Transfer from Florida
Next Gator Softball Shuts Out Arkansas 5-0 on Senior Day