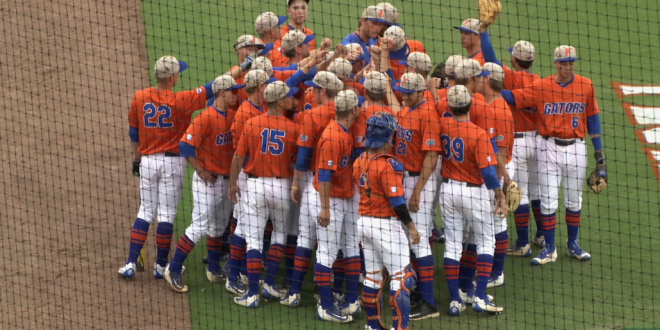 The top ranked Florida baseball team finishes a perfect midweek season Tuesday night against the University of South Florida with an 11-4 win in Gainesville.  With their sixth straight win against the Bulls, the Gators improve to 41-8 on the season and to 24-1 in non-conference play.

Tuesday night’s game started out with a bang from USF. The Bulls took a 3-0 lead at the top of the first inning against Gator starting pitcher Scott Moss. Florida coach Kevin O’Sullivan says that though the Bulls scored on Moss he was pitching better than he has all season.

Florida scored two runs in its half of the first inning on a JJ Schwarz sacrifice fly and an RBI double from Pete Alonso but the Bulls scored a run in the sixth inning to build a 4-2 lead.

The Gators batted around and rallied to score six runs in the seventh inning to break the game open, the ninth time this season that the Gators scored five or more runs in an inning.

Jonathan India doubled home Dalton Guthrie to plate the first run and India scored on a wild pitch.  Alonso drove home a run with a single and Deacon Liput hit a three run triple to highlight the inning.   Peter Alonso had a three hit night and drove in three runs and he says it is his job to get the guys who are on base home.

Dane Dunning picked up the win in relief for the Gators to improve to 4-2 on the season; he pitched two and a third innings and did not give up a run.

The Gators return to action at home Friday at 7 pm when they open a three-game series against seventh ranked Vanderbilt. 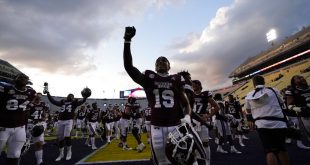