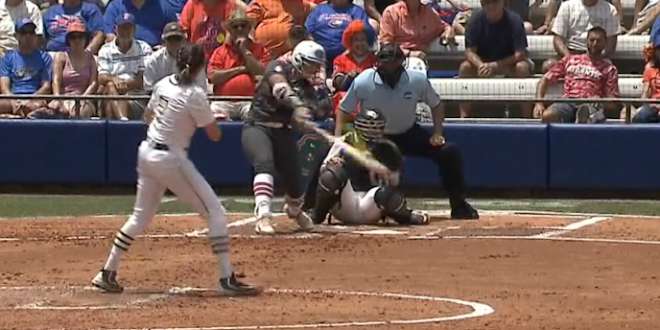 Through the first two days of the NCAA Gainesville Regional, the Gator softball team has made it look easy. A day after shutting out Alabama State, the Florida Gator softball team (55-5) shut out the UCF Knights (37-21) 5-0. The Gators were the visiting team in Saturday’s contest.

Outfielder Amanda Lorenz scored first, hitting a home run off the Gators’ NCAA Championship sign to give the Gators a 1-0 lead in the top of the third. It was the eighth home run of the season for the freshman.

The Gators continued to build their lead in the seventh. Taylore Fuller’s RBI scored Lily Mann, and a sacrifice fly from Kelsey Stewart scored Justine McLean. The Gators went on to defeat the Knights 5-0.

Gators’ pitcher Delanie Gourley certainly did her part in the victory, finishing the day with 13 strikeouts while giving up just one hit.

The Gators will be back in action on Sunday in NCAA Gainesville Regional final.

Junior telecommunication student at the University of Florida. Passionate about all things related to sports.
@@EllenBazley
Previous No. 1 Gator Softball Advances in NCAA Regional
Next Florida Softball Advances to NCAA Super Regionals After Shutout