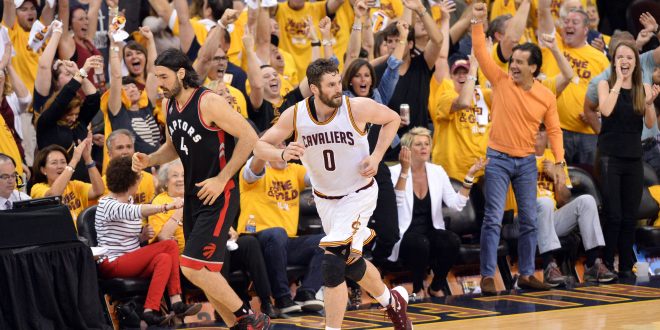 May 25, 2016; Cleveland, OH, USA; Cleveland Cavaliers forward Kevin Love (0) runs back down court after hitting a three-pointer against the Toronto Raptors during the second quarter in game five of the Eastern conference finals of the NBA Playoffs at Quicken Loans Arena. Mandatory Credit: Ken Blaze-USA TODAY Sports

The Cleveland Cavaliers have taken a 3-2 lead in their best of seven Eastern Conference Finals series with the Toronto Raptors with a 116-78 win last night in Cleveland.

After back to back losses in Toronto the Cavs came with a vengeance in Cleveland. At halftime they led by 31 points, which was the largest halftime lead in conference finals history. In the history of the Toronto Raptors they have never even been down by 30 points in any game. One player that stepped up this game for Cleveland was Kevin Love, who led a balanced scoring attack with 25 points.  Love says that he was aggressive this game but was in more of a smooth rhythm compared to the losses the Cavs took in Toronto.

Lebron James led the team in assists with eight in the game while also adding 23 points and six boards while sitting out the entire fourth quarter when the Cavs led by 37 points.  Guard Kyrie Irving also added 23 points to the board. If the Cavs win the next game they will win their second straight conference Eastern Conference championship and head to the NBA Finals.

Toronto is now on the brink of elimination. If they lose Friday’s game in Toronto their season is over; a win forces a Game 7 back in Cleveland. DeMar DeRozan and Kyle Lowry were the leading scorers for the Raptors scoring 14 and 13 points respectively in this game. Bismack Biyombo, who collected 40 rebounds in the last two games had only four last night. However, the Raptors did get back center Jonas Valanciunas who made his return to the court after being out for the last eight games due to a sprained right ankle.

The Raptors host Friday in Toronto and to keep their season alive. Tip off is set for 8:30 PM on ESPN.