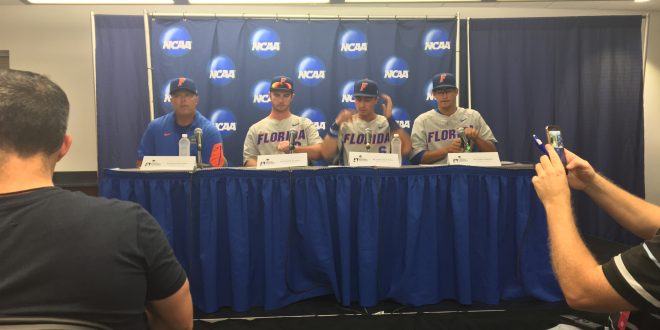 The first winner’s bracket game of the 2016 NCAA Gainesville Regional saw the Florida Gator baseball team (49-13) earn a nail-biting 6-5 victory over the University of Connecticut Huskies (38-24) on Saturday.

Florida junior Dane Dunning earned the win for Florida, improving to 5-3 on the season after giving up one hit in 3.2 innings of relief. UConn’s Devin Over dropped to 0-4 on the year after shouldering the Huskies’ loss.

Connecticut baseball head coach Jim Penders says Florida outplayed his team on Saturday night, but the Huskies have nothing to be ashamed of.

UConn first basemen Bobby Melley made the score 1-0 early with a two-out homer to right field off of Florida starter A.J. Puk but with two outs in the top of the third, freshman Danny Reyes made the most of his at-bat, delivering his first career homer to tie the game at 1-1. Dalton Guthrie was up next, advancing to second after an error at first base helped to extend his single. Buddy Reed then stepped up to bat and sent Guthrie in to take a 2-1 lead.

In the bottom of the third, Buddy Reed committed an outfield error allowing Tyler Gnesda to advance to second. An Aaron Hill single loaded UConn’s corners before Gnesda scored an unearned run to tie the game 2-2.

In the top of the fourth, Mike Rivera walked and was promptly scored via a pair of singles by India and Nelson Maldonado. Florida left two runners on base to end the inning. Meanwhile, in the bottom of the fourth, Puk recorded three quick strikeouts to keep the lead at 3-2.

The top of the fifth saw Florida’s offense extend the lead easily. Guthrie singled before Alonso stepped up and homered for the third time in two games to make the score 5-2.

UConn responded accordingly, tying the score in the bottom of the fifth after a string of inconsistent Puk pitches caused Florida to make a change on the mound. Puk gave up a double, hit Zac Susi with a pitch, and gave up two more singles before John Toppa came in on an Aaron Hill single to make the score 5-3. Hill was then advanced to second on a wild pitch and Susi scored on the same play. Puk was pulled as Florida saw their lead reduced to one run.

Dunning came in to relieve Puk before giving up a sacrifice fly that scored Willy Yahn and tied the game at 5-5. Connecticut left two runners on base to end the fifth.

Florida threatened in the sixth after a quick single by India, but the inning was cut short when Maldonado grounded out into a gift-wrapped double play. Danny Reyes struck out swinging to end the inning after Devin Over replaced Anthony Kay on the mound.

The Gators scored the eventual winning run in the eighth inning when Jonathan India hit a solo homer. Shaun Anderson relieved Dunning to finish up the ninth, ending the game with a single strikeout after Florida’s defense held strong for two outs.

Shaun Anderson ties the school record with his 13th save of the season. pic.twitter.com/97BmfhrrLA

On Sunday Florida will play the winner of an early match up between UConn and Georgia Tech. Country 103.7 The Gator has live coverage at 5:50 p.m.