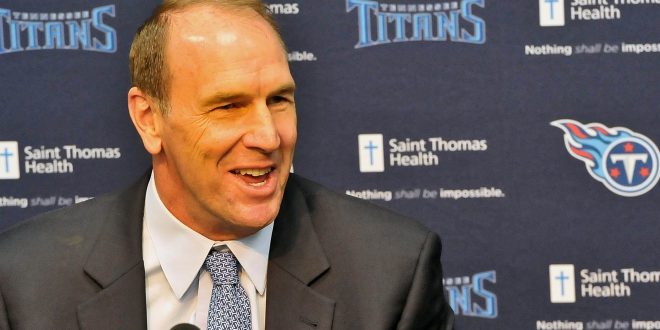 Former Florida Gator football player Mike Mularkey looks forward to the challenges of taking on his job as head coach of the Tennessee Titans.

Mularkey played tight end at the University of Florida from 1980-1982. After his time as a Gator, he went on to play nine seasons in the NFL with the Minnesota Vikings and Pittsburgh Steelers.

Following his time in the NFL, he began his coaching career as the tight end coach for the Tampa Bay Buccaneers. He later served as the head coach of the Jacksonville Jaguars and Buffalo Bills. Mularkey has a coaching record of 18-39.

Mularkey served as the Titans interim head coach for the last nine games of the 2015 season.  He was hired as head coach in January. After taking over as interim head coach the team committed the least amount of penalty’s in the entire league and he takes a lot of pride in that.

Mularkey is focused on eliminating penalties: "We're not going to be one of those teams that beats themselves." pic.twitter.com/IVEbDZxe4g

Although the team committed less penalty’s under Mularkey, it didn’t show in the team’s record. The Titan’s finished the last nine games of the 2015 season 2-7.

Following a rookie mini-camp the coaching staff is pleased with what they see in their draft picks. Mularkey expects second year quarterback Marcus Mariota to come in and pick up the offensive changes quickly. With the addition of running back Demarco Murray the coaching staff is looking for major improvements in the team’s running game.

The Tennessee Titans first game of the 2016 season is at home against the Minnesota Vikings—Mike Mularkey’s former team.

Previous Cavs and Warriors to Battle in NBA Finals Game 3, Love Ruled Out
Next Multiple Gators Expected to Go Early in MLB Draft