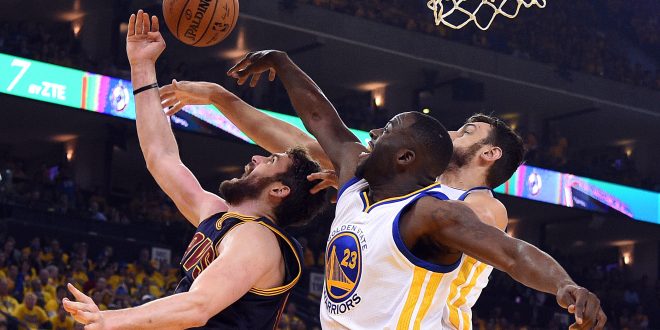 Cavs and Warriors to Battle in NBA Finals Game 3, Love Ruled Out

BREAKING: Kevin Love has been informed that he won’t be medically cleared to play in Game 3

The Cleveland Cavaliers are back home and needing a win badly to stay alive in the NBA Finals as they trail 2-0 in the series after losing the first two games on the road against the Golden State Warriors.  The Cavs lost the first two games by a total of 48 points, making it the largest point differential in the history of the NBA Finals. However, the Cavaliers are unbeaten at home in the 2016 playoffs.

With Kevin Love sitting out of practice on Tuesday due to a concussion that he suffered on Sunday night’s game, Tristan Thompson and J.R. Smith could have bigger roles tonight. The Warriors defeated the Cavaliers 4-2 in the 2015 NBA Finals without Love who was out with a shoulder injury. Love’s return for tonight’s game is still questionable and will be determined by medical personnel.

The Cavs offense looked unsteady in the first two games leading to the Warriors holding the Cavaliers to 36.5 percent shooting.  Cleveland’s LeBron James hopes that if the team can score a bit more then it could help out their defense.

Draymond Green who scored 28 points and had five assists in Monday’s game for the Warriors said that the energy of the home crowd helped his team and feels their motivation tonight could come from quieting a home crowd in Cleveland.  The Warriors have won their last five games after falling behind Oklahoma City 3-1 in the Western Conference finals.

ESPN Gainesville 95.3 FM and AM 850 WRUF has live coverage of the game starting tonight at 8 p.m.