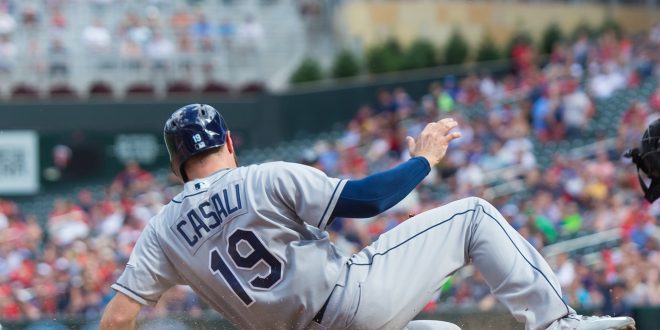 The Tampa Bay Rays completed a 10 game road trip with a 6-3 victory over the Arizona Diamondbacks on Wednesday Afternoon.   Rays Manger Kevin Cash says Jake Odorizzi kept them in the game. Odorizzi, the starting pitcher for the Rays in the game, went five innings, allowed three runs on five hits while striking out eight and walking three.   The Rays went 5-5 on their road trip including series sweeps at Minnesota and Arizona. The Rays start a nine game homestand on Friday when Houston comes to town; Tampa Bay will start righty Matt Andriese (4-0, 2.52 ERA) against Houston righty and former Gator signee Lance McCullers (3-1, 4.23).

Meanwhile, The Miami Marlins will continue their three-game series against the Minnesota Twins after losing 7-5 Wednesday night. The Twins have taken the first two games of the series.  In this game, the Marlins fell behind early but rallied to score four runs in the fifth inning to tie the game.  Marlins manager Don Mattingly says he was happy to see the Marlins fight for those four runs in the 5th.  The Twins got a tie breaking double from Trevor Plouffe to win the game.  Today, Miami starts righty Tom Koehler (3-6, 4.50) on the mound who has not allowed more than three runs in his last six starts.  The Twins will start righty Ervin Santana (1-5, 4.50 ERA).

Meanwhile the Atlanta Braves completed their series against the San Andres Padres Wednesday night with a 4-2 victory.  Atlanta, with the worst record in the big leagues at 17-42, broke a six game losing streak with the win and avoided a series sweep.

Braves interim manager Brian Snitker says Julio Teheran gave them just what they needed. The Braves starting pitcher threw eight innings and allowed just two runs while striking out eight.  Atlanta has a day off on Thursday and will begin a series against the Chicago Cubs on Friday. Bud Norris (1-7, 5.28) will open on the mound against Cubs righty Jason Hammel (7-1, 2.14).