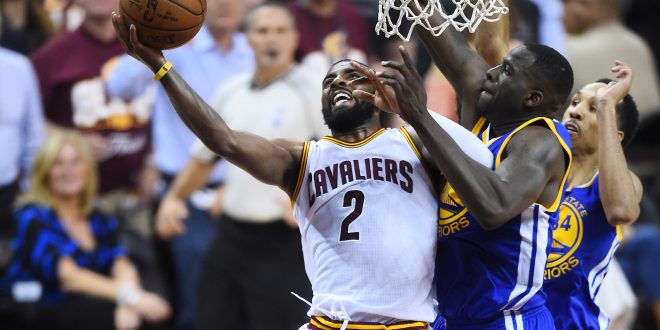 Cavs Back In The Hunt In NBA Finals

After two double digit losses against the Golden State Warriors, the Cleveland Cavaliers got their first win of the NBA Finals on Wednesday night in Cleveland in a 120-90 rout.  The Cavs snap a seven game losing streak to the Warriors which went back to Game 4 of the 2015 NBA finals.

The Cavs came out swinging in the first quarter. At one point they led by 20 points and point guard Kyrie Irving dropped 16 points just in that quarter. Even with power forward Kevin Love being out for this game after not being able to pass the NBA’s concussion protocol after suffering a concussion in Game 2, the Cavs were still able to dominate.

Stars of the show for Cleveland were Lebron James with 32 points and 11 rebounds, as well as Irving with 30 points. Other contributors included JR Smith who splashed a couple of threes to increase his point total to 20, and Richard Jefferson was in for Love while adding nine points, eight rebounds and two steals.  Tristan Thompson made his presence known around the backboard with 14 points and 13 rebounds.

Irving says that their pace and staying true to themselves really helped them win their first game at home for the series.

The Warriors only showed a few flashes of success by digging out of their 20 point hole in the first quarter but they did only trail 51-43 at the half.  But the Cavs pulled away in the second half to secure the win.

Four Warriors scored in double figures led by Harrison Barnes with 28 points.   Stephen Curry scored 18 points and Andre Iguodala and Klay Thompson were also double figure scorers.  As good as the Warriors have been, they have now lost every Game 3 in the post season making them 0-4 in those games.

Golden State still leads the series 2-1; Game 4 is set for Cleveland on Friday.

Tough game… We will be better Friday!!! Don't get it twisted we still up 2-1 #dubnation