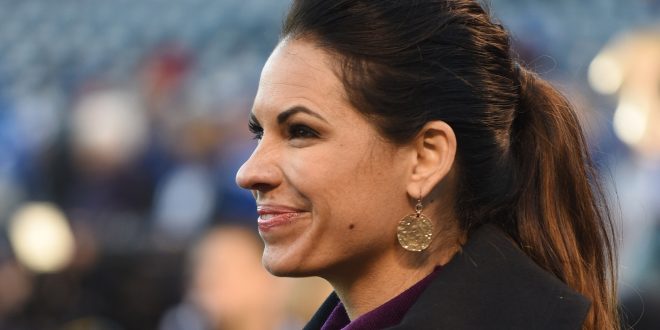 In the summer of 2015 she became the first woman to sit in ESPN’s College World Series booth. Two months later she became ESPN’s first female MLB analyst, during the Cardinals-Diamondbacks game. Later on that week, Jessica called the Cubs’ Jake Arietta’s no-hitter against the Diamondbacks, making her first showing during Sunday Night Baseball. She continued making history in October when she became the first female postseason analyst, during the American League Wild Card Game. After beefing up her resume in 2015, she solidified her position by becoming a permanent member of ESPN’s Sunday Night Baseball team.

Speaking candidly with ESPN Gainesville’s Steve Russell on Sportscene, Mendoza said that the transition from softball to baseball, a male dominated arena, was one that initially made her nervous. However, after the first pitch she became comfortable, telling herself “I know this.”

Discussing softball, and the Women’s College World Series, Mendoza was surprised that the Florida Gators did not make it to the World Series, calling them “the best team”. She mentioned that the upset showed the “beauty of the postseason”. Mendoza conceded that the SEC is the best conference in college softball, something it pained her to admit, as her alma mater Stanford is a member of the PAC-12. This year, the SEC had four teams go to the WCWS (Auburn, Georgia, Alabama, and LSU). Georgia knocked the top-seed Gators out in the Super Regionals. By comparison, the PAC-12, a conference that has dominated the WCWS since it’s inception, only had one team make it to the series in Oklahoma City this year UCLA.

Mendoza believes that it is the energy that makes softball more popular each year, something that isn’t seen in professional sports.

Former @StanfordSball player @jessmendoza says the sport taught her how to be both confident and humble. #WCWShttps://t.co/T1JWX8DA5u

Jessica Mendoza will be in the booth for Game 3 of the Women’s College World Series. You can also watch her Sunday nights contributing to MLB coverage with the “Sunday Night Baseball” team on ESPN.