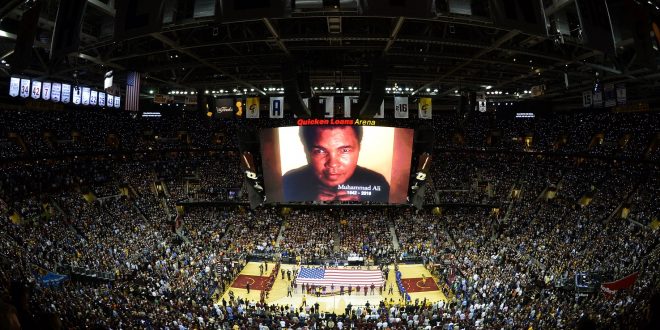 Muhammad Ali, who died last Friday, was laid to rest in a traditional Muslim prayer service on Thursday, June 9, in his hometown of Louisville, Kentucky.

Thousands of people representing different creeds, races, religions, and cultures traveled from around the world to attend Ali’s jenazah, the Arabic word for funeral. Over 14,000 tickets were sold and the event was also streamed live from the Kentucky Exposition Center. These were Ali’s wishes – to be remembered and celebrated, surrounded by people who were moved by his words and actions.

Ali’s impact on the sports world is enough to justify the magnitude of his service. However, Ali wouldn’t have wanted boxing to define his legacy. Ali was a fighter who promoted peace.

According to Jim Dundee, son of Ali’s famed boxing trainer Angelo Dundee, Ali was a kid at heart – always happy and warm towards those he met.

A leader in the Civil Rights Movement, a humanitarian, a visionary – that’s who Muhammad Ali was. Boxing was simply that, boxing; and that would have been enough for most people.

Instead of embracing the stereotypes that many athletes still subscribe to, Ali turned his success into a platform for meaningful change. He was the best at what he did, “The Greatest”, so we couldn’t help but turn our attention to the causes he represented.

Dundee recounts an experience where Ali literally stopped traffic on I-95, shaking fans’ hands and spreading joy to people on the highway. When it came to spending time with fans, Dundee says Muhammad Ali was an approachable athlete who treated everyone he encountered with respect.

Respect—an uncommon characteristic in today’s world. Muhammad Ali embodied what we should all aspire to, his confidence in his craft and humbling kindness made him one of the world’s rarest treasures.

Ali even defied America’s government because of his beliefs. His religious convictions and passion for peace and love wouldn’t allow him to travel to Vietnam and fight in a war he saw to be unjust.

Dundee says Ali could have had a very comfortable job in the military, but he felt it was necessary to spread his message and stand up for what was right. Ali refused to make the comfortable choice and that’s what separates him from so many people. He stood on the right side of history before it was the “correct” choice.

In a world full of yes men, Ali said no. No to killing innocent people. No to fighting a war he had no stake in.

Ali is The Greatest. The Greatest boxer of all time in many people’s eyes. To Dundee – Ali was a friend and a brother – Ali was family. That’s what we should take away from his passing: Ali was just another human being, one who truly changed the world and made it better because of his actions.

Ali’s legacy should remind us that we’re all are capable of greatness, the people you surround yourself with determine your worth.

I'm a senior studying Political Science at the University of Florida. Multimedia Sports Reporter for ESPN Gainesville 95.3 and WUFT - Passionate about life, sports, and fitness.
@charliejordanuf
Previous Gators Looking to Continue Dominance over Florida State in Super Regional
Next Five Gators Selected On the First Night of the MLB Draft

The ACC announced its updated schedules for 2020. All schedules include ten conference games plus …