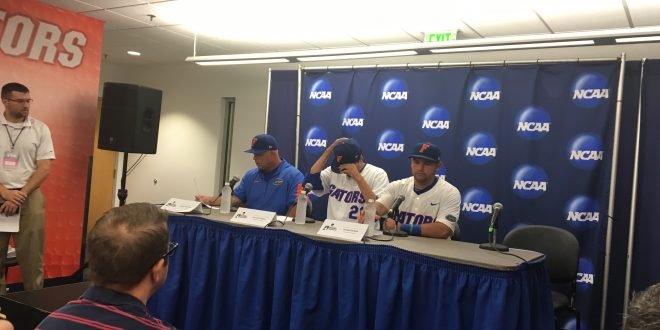 The top-seeded Florida Gator baseball team (50-14) fell 3-0 against in-state rival Florida State (41-20) in Saturday night’s NCAA Super Regional game from McKethan Stadium.  The loss marks the first time the Gators have been shut out at home in an NCAA tournament game.

Faedo got off to a decent start.  He totaled five strikeouts in first two innings and through three innings, he had pitched 13 consecutive scoreless innings for Florida.

But in the FSU fourth, Jackson Lueck began the inning with a double.  Faedo followed up by walking three batters, prompting Lueck to score.  It could have been worse, but Faedo induced a double play ground ball to keep the damage at a minimum.

In the fourth inning, a lead off single chased Faedo and sent reliever Dane Dunning into the game.  FSU’s Taylor Walls hit the first pitch he saw for an RBI double and later in the inning, Walls scored on an error by second baseman Deacon Liput who was late covering first base on a sacrifice bunt as he dropped a throw while trying cover the bag.

Turns out that was all that Carlton would need.  He retired 19 straight batters and only two Gators managed hits in the game.  Florida State baseball head coach Mike Martin, who just eclipsed 39 consecutive seasons with 40 wins or more, says he’s never seen Drew Carlton pitch this well.

Gator coach Kevin O’Sullivan says Carlton was simply too great for the Seminoles and as far as Carlton is concerned, he says he had fun on the mound and it meant a lot for him to stay in and finish the game.

Despite the shutout, Kevin O’Sullivan says he likes Florida’s chances in Game 2.  Logan Shore will get the start on the mound for the Gators in Game 2 Sunday and Country 103-7 The Gator has live coverage at 5:50 pm.