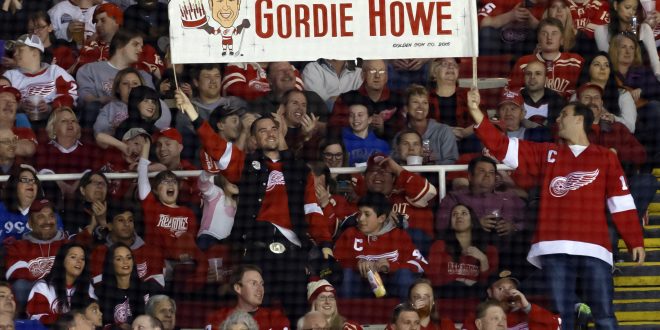 The name “Mr. Hockey” was given for more reasons than one. Howe helped the Detroit Red Wings compile four Stanley Cups, he racked up six Hart Trophies, played in 1,767 NHL games over 26 seasons, and he holds the second spot in NHL history for goals scored. He skated all over the ice and shattered records left and right.

From 1946 to 1980, the Hall of Famer became an idol to Wayne Gretzky and so many others across the hockey world. As a Canadian, “Mr. Hockey” bridged the gap between hockey and the Americans. Barry Melrose, ESPN Hockey Analyst who played in the World Hockey Association and the National Hockey League against Howe, compares this loss to Muhammad Ali’s death.

Gordie Howe played into his 5o’s, which gave players who grew up idolizing him, a chance to play against him. Melrose says Howe’s countless years of playing without injuries, showed his heroism to the sport.

“Mr. Hockey” gave his heart to hockey, and now… Mr. Hockey will forever be in our hearts.

A senior at the University of Florida reporting on Gator sports, local Gainesville and surrounding area sports, and telling the stories of local athletes. Born and raised in Gainesville, Florida with a passion for telling people's stories and having fun doing it.
@SportsDarwinism
Previous NCAA Baseball: Super Regionals Get Underway
Next Florida Baseball Blanked in Super Regional by In-State Rival FSU