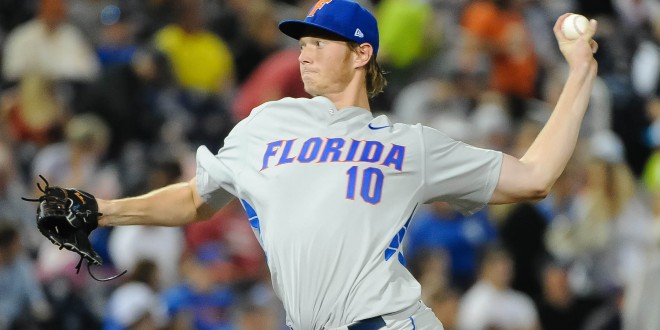 Pitcher A.J. Puk was the first Gator off the board, going to the Oakland Athletics with the sixth overall pick.

Though getting drafted in the top ten of the first round is nothing to scoff at, Puk was, at one point, thought to be the potential number one overall pick. Callis said the reason for his slip was due to “inconsistency.”

Callis said when Puk is good, he looks like the best player in the country, but he will also have times where he plays poorly, specifically his performance against UConn in the NCAA Regional. Puk gave up five runs on five hits during that game before being replaced by Dane Dunning.

Including Puk, Florida had six pitchers drafted. Logan Shore was drafted in the second round, also by the A’s.

With the 47th overall selection, the A's select RHP Logan Shore out of the University of Florida. Gators everywhere!

Callis said Shore may have been able to go in the first round, but his stuff was pretty average. Shore’s earned run average for the season is 2.24. However, Callis did say that if you needed someone to win a game, most people would pick Shore over Puk right now.

Florida outfielder Buddy Reed was also drafted in the second round, right after Shore.

With the number 48 pick in the 2016 #MLBDraft, the #Padres select OF Buddy Reed from Florida.

Callis said if Reed had hit more, he would have been an early first round pick. Reed’s batting average for the season is just .261.

The deadline for amateur draft picks to sign is July 15.