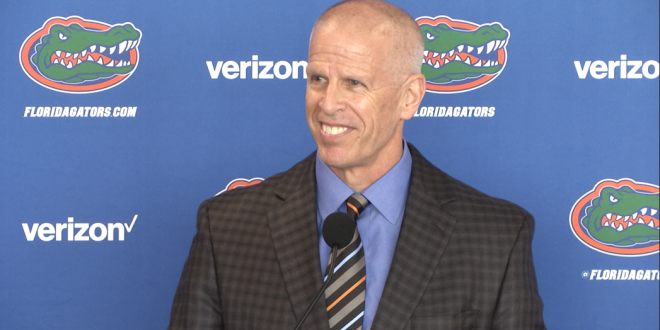 A day after an emotional announcement of his retirement, Jeremy Foley entered his own press conference as loose as ever. He even teased his former employee and close friend, Billy Donovan, and said he had changed his mind and will be returning as athletic director. Unlike his friend, who walked away from the Orlando Magic to come back to Gainesville, Foley is actually going to be stepping down.

When Foley entered the room alongside University of Florida President Kent Fuchs, the room turned to silence. It is well known that in every endeavor, whether it be after a huge victory or after a coach departs, Foley exudes emotion because of his passion towards this athletic program. After President Fuchs called Foley his friend and mentor, the longest serving athletic director in UF history came up to the podium with a huge smile on his face. It was time for celebration with no regrets attached.

Foley was a young college student from the New England area who came to Gainesville in 1976 to finish his master’s degree by interning for the university’s ticket office. On his first day, no one knew that he was coming, which caused Foley to question himself on why he made the drive down. Little did he know at the time, that he would spend the next 40 years of his life living and breathing the University of Florida and Gainesville.

Jeremy Foley tells us the story of his first day as a ticket office intern at UF. #Gators pic.twitter.com/5q2JmYYkjt

Foley said that he went through this journey with no regrets. Certainly some decisions didn’t go his way, but in no way, shape or form is it bothering him in a time like this—a time where he feels like he could step down from his position and the athletic department would still be in great shape.

He admitted that there are still things to be done that he must see through until the October 1 date, of when his retirement officially begins. Foley says he will take care of what’s on the agenda and help for many years to come because he refuses to be cut off from the Gator program. The 63-year-old man who second guessed himself 40 years ago was consumed by the mania surrounding this program and will forever hold it deep in his heart. He has a Gator tattoo on his ankle to prove it.

President Fuchs mentioned in his opening remarks that the search for a new athletic director will be one that will go across the nation. Foley, of course, will do anything he can to help Fuchs in this process, but at the end of the day, it will be Fuchs’ decision.

As far as what Foley will do with the extra time on his hands, attending concerts of his favorite performers like Bruce Springsteen is definitely on his list. Yet, he probably won’t miss a Gator game for any other event. His place, whether it be as athletic director or not, is below the goal post at The Swamp, court side at the O’Connell Center, and high up in the stands at McKethan Stadium. At the end of the day, Foley is a fan and his passion for this athletic program will never fade.