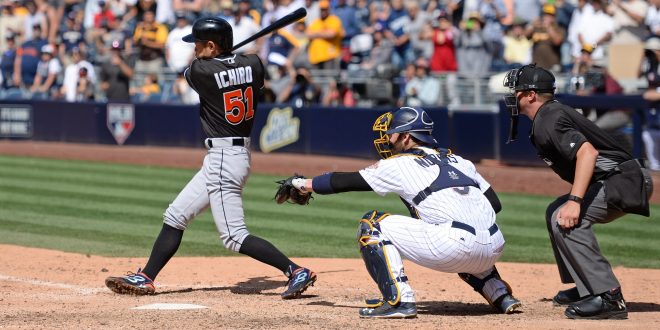 After tallying two hits on Wednesday against the San Diego Padres, Ichiro Suzuki raised his career total hits to 4,257, passing Pete Rose’s Major League hit record. Suzuki’s total hits are a combination of those from both his Japanese and American professional careers.

1,287 of Suzuki’s hits came from his time in Japanese professional baseball when he played for Orix from 1992-2000. His 2,979 MLB career hits are combined from playing with the Mariners, Yankees and now the Marlins. Suzuki says it’s not about the record, it’s about his teammates and the way the fans reacted, that is what meant a lot.

He reached base twice in the Marlin’s 6-3 loss to the  Padres Wednesday, with his first hit up the first base line in the first and his second was in the ninth when he lined a double into right field.

Suzuki is on pace to become the 30th player to reach 3,000 career hits. He is 42, turning 43 in October and only two other players were 42 or older when they recorded their 3,000th hit. Marlins Manager Don Mattingly says Ichiro is a really special player, you love to see this, and see him keep marching towards 3,000.

In 2001, Ichiro Suzuki entered the MLB at age 27 with the Seattle Mariners, capturing American League Rookie of the Year and MVP awards. He later played for the New York Yankees before ending up on his current team, the Miami Marlins.

From Japan to Seattle to New York to Miami: Ichiro. Legend.https://t.co/vBdG70MvG8

For the Marlins, Suzuki is batting .349 in a part time role.

Next up for Ichiro Suzuki and the Marlins is a ten-game home stand beginning with a four-game series with the Rockies.