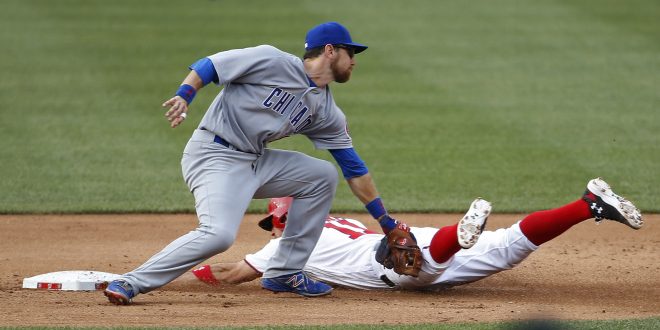 As we reach the halfway mark in the Major League Baseball season, the Chicago Cubs are the class of the National League.

The Cubs not only lead the NL Central and the NL with an overall record of 44 and 20, but they also lead the league with the best overall record. Last night’s matchup between the Cubs and Washington Nationals ended with a walk-off home run by Jayson Werth allowing the Nationals to win 5-4 in 12 innings. The Nationals lead the NL East, come second in the NL, and are third overall.

Elsewhere in the NL, the San Francisco Giants swept the Milwaukee Brewers in their series 10-1 yesterday. Pitcher Johnny Cueto’s cutter was they key to the Giants win. Giants Manager Bruce Bochy says that Cueto prepared well and pitched great. The Giants lead the NL West, are third in the NL, and currently on a five-game win streak. They look to continue that streak as they head to Tampa to face the Rays Friday night.

Although the Miami Marlins lost 6-3 Wednesday night to the San Diego Padres, they have some momentum going into their next four-game series against the Colorado Rockies because of the milestone reached by outfielder Ichiro Suzuki. Suzuki now has 4,257 hits after last night that are complied from both the MLB and Japan together. Marlins Manager Don Mattingly says that Suzuki’s accomplishment is not surprising because of his work ethic.

Congrats to Ichiro on 4,257…that's a lot of hits…he rakes…glad we're all able to see it up close every day

At the bottom of the NL totem pole is the Atlanta Braves who wrapped up their series against the Cincinnati Reds today tying at two games a piece. The Braves won 7-2 and first baseman Freddie Freeman had a great game hitting as he completed the cycle.

Matchups for tonight include the Philles v. Blue Jays and Pirates v. Mets both at 7 p.m. and the Dodgers v. Brewers and Nationals v. Padres at 10:10 p.m.