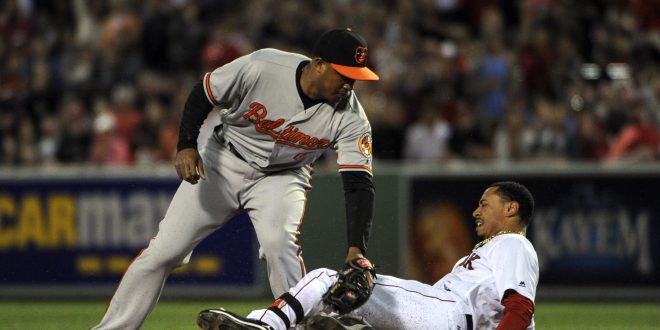 Despite their power, and having the best start of any team this season, the Baltimore Orioles have struggled to separate themselves from the rest of the AL East. The Boston Red Sox are currently leading the majors in runs scored and have the chance to get take the lead in the tightest division in baseball with a match up against the Orioles tonight. The Toronto Blue Jays have just as many wins as Baltimore and Boston, but are two games back because they have four more losses than both teams. The Blue Jays have a chance to shake up the top of the AL East when they start their series against Baltimore on Friday. A team not be forgotten is the Tampa Bay Rays. They have a chance to bring their record back to .500 on the season. Third baseman Evan Longoria says the team just keeps winning, as the Rays have won nine of their past 11 games, making them one of the hottest teams in baseball.

With the Chicago White Sox sliding down into fourth place in the division after a blazing fast start to the season, the AL Central is a heated four team race that is separated by only two and a half games. The Kansas City Royals finished a sweep of the Cleveland Indians which gives the two teams the same record atop of the division. Kansas City will have to start fending off Detroit in a four game series that starts tonight. The Tigers have a chance to pass the Royals in the standings with a four game sweep. Detroit has been good of late by winning six of their last 10 games, but lost a game and the series to the White Sox last night. The Indians have a chance to separate themselves from the pack with six of their next nine games coming against the White Sox and Tigers. The Indians-White Sox series will begin on Friday.

The best team in baseball with the least media attention is arguably the Texas Rangers. With the best record in the American League, the Rangers have been hot winning seven of their last 10 games. Each of those games have been against division foes which has helped give them the largest lead of any AL division at six and a half games over Seattle. The Athletics-Rangers game tonight will be the last chance for an AL West team to face Texas until the second half of the season.