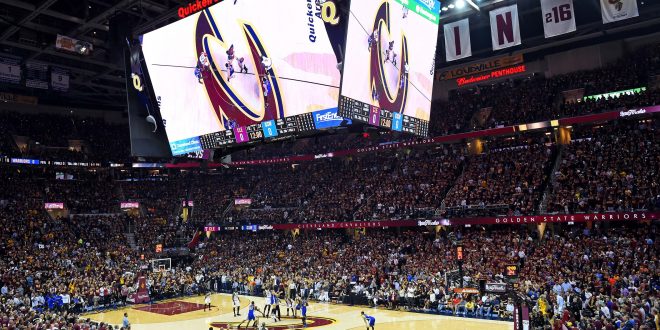 The Golden State Warriors and the Cleveland Cavaliers are set up for Game 6 action of the NBA Finals Thursday in Cleveland.  The Warriors lead the series 3-2 as Cleveland looks to end a 52-year title drought that has plagued the city.  The last title came from the Cleveland Browns pre-Super Bowl era in 1964.  LeBron James faces an obstacle that no other NBA team has been able to do, come back from a 3-1 deficit in the NBA Finals.  With the weight of Cleveland’s hope and title dreams on his shoulders, James enters the game with one goal, win this last game in Cleveland and send it back to Golden State.

Cleveland enters Game 6 on a roll with a 15 point road win in Game 5 of the NBA Finals fueled by a shooting clinic provided by the dynamic duo of James and Kyrie Irving. Both teammates dropped 41 points and combined shot for 33-54 from the field (61%). Though, the Cavaliers failed to limit the Splash Brothers, Steph Curry and Klay Thompson combined for 62 points and shot for 19-41 from the field (46%).

Early in Game 5, the Warriors found themselves in trouble as Andrew Bogut fell to the floor with a knee injury and unable to return for the rest of the series. Bogut is disappointed with his injury but looks forward to getting back to playing condition.  Though, tonight the Warriors welcome back Draymond Green after being suspended in Game 5.  Green has averaged 14.8 points per game, 9.3 rebounds per game, and 5.8 assists per game in the NBA Finals.  The Warriors hope that Green’s presence will lessen the void felt by losing Bogut.  According to Green, despite losing Bogut, if Golden State comes and plays to the best of their abilities they will win tonight.

What type of impact will Draymond Green have in Game 6? #NBAFinals pic.twitter.com/d9oT1ugos1

Cleveland looks to defend their home court against the Warriors to bring a Game 7 back to Golden State to keep their title hopes alive. Cleveland has done a great job defending home court this year with an 8-1 record in the playoffs.  The Warriors look to grab another road win in Cleveland to end the series becoming back-to-back NBA Champions. Though, with a win tonight the Golden State Warriors solidify themselves into NBA history as not only back-to-back NBA Champions, but also arguably one of the greatest teams to ever play in the NBA.