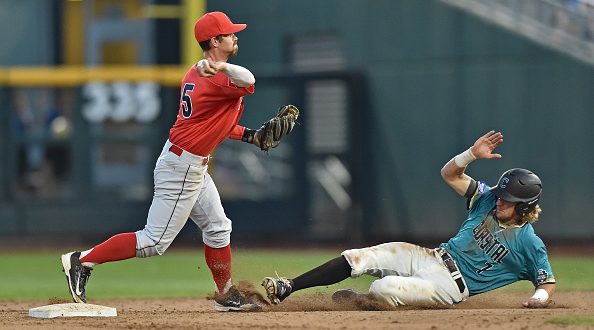 Arizona On The Brink of Title in the College World Series

With a 3-0 win over the Coastal Carolina Chanticleers last night, the Arizona Wildcats are 27 outs away from capturing the 2016 College World Series crown. This could potentially be the fifth title in school history for the Wildcats and the second championship win in five years.

Arizona has their pitcher JC Cloney to thank for the win last night. He pitched a complete game shutout, allowing just four hits while striking out six batters. Cloney extended his scoreless innings streak to 16 in the College World Series and did not allow an extra base hit to a stout Chanticleer offense. In fact, a runner did not move to second base until the ninth inning.

When your son throws a gem at the #CWS… PURE JOY! pic.twitter.com/xVAd5uIU8I

Cloney got some comfort early from his offense as Ryan Aguilar drove in lead off man Cody Ramer in the top of the first to get the early 1-0  lead. The game would remain quiet until the seventh when the Wildcats got two more runs from a sac fly from Zach Gibbons and another RBI single from Aguilar. The way Cloney was pitching and Arizona was playing defense, one run would suffice. This was especially true when Gibbons made a tremendous grab in right field in the bottom of the eighth when the Chanticleers has a runner on base.

At the wall… In the 8th… Zach Gibbons with the #SCTop10 grab to keep Arizona's 3-0 lead! pic.twitter.com/8j3f2DhGAe

Game 2 will begin tonight at 8 p.m. Coastal Carolina looks to extend the series to a decisive third game and Arizona looks to put another banner on its storied program. 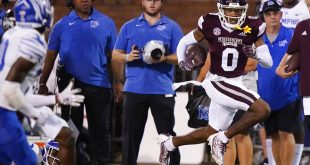 The Arizona Wildcats will host the Mississippi State Bulldogs in Tucson Saturday night. Kickoff is …