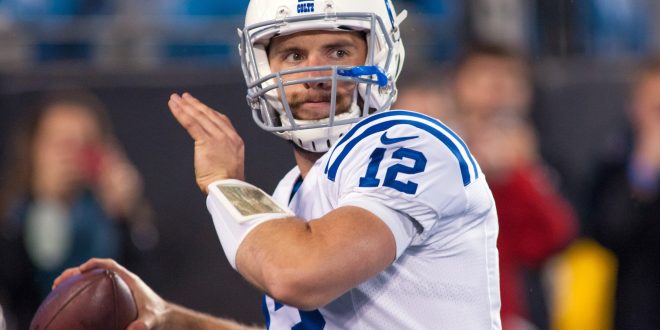 Drinks are on Andrew Luck tonight.

The 6′ 4″ quarterback for the Indianapolis Colts signed a six-year record breaking $140 million contract on Wednesday, which is substantially larger than the previous record holding $110 million contract quarterback Aaron Rodgers signed with the Green Bay Packers in 2013. That’s $23.3 million a year, before he carves out almost 10 million in taxes and medicare.

This development comes almost a year after a lacerated kidney ended Luck’s seasons after only Week 9. But Luck admitted to a lousy season even before his injuries benched him. So what does this mean for Luck and the Colts? First of all, they probably focused on his golden 2012-2014 seasons when drafting the contract. They have faith in a future comeback.

Even further, the year-long anticipated signing will reportedly lift the market rate for franchise quarterbacks; a rate that hasn’t quite kept up with the recent salary cap growth.

Indianapolis Colts’ owner Jim Irsay says the head turning sum of money is worth securing a franchise quarterback. He took to twitter to express his excitement over the deal.

The Indianapolis Colts are back for the 2016-2017 season on September 11th when they take on the Detroit Lions at home.