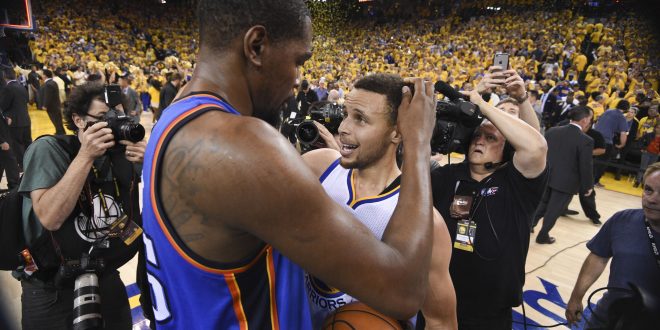 With the first week of NBA Free Agency wrapping up, it is safe to say that it has been quite a rollercoaster. With Kevin Durant signing a blockbuster deal with the Warriors and Mike Conley becoming the highest paid player in the league, it’s safe to say that the addition of more cap space for teams to sign players has created quite a shockwave across the NBA Free Agency market. Here are a few winners and losers thus far.

Coming off of two straight trips to the NBA Finals, it didn’t appear that the Warriors really needed to add any pieces to the puzzle. But when Kevin Durant comes knocking at your door, are you really going to turn him down? In what could be considered one of the biggest free agency lands in modern NBA history, the Warriors added superstar Kevin Durant to a roster that is already filled with a two-time MVP, and two other up and coming superstars in Klay Thompson and Draymond Green.

However, signing Kevin Durant did come at a price. The Warriors lost their two best big men, Andrew Bogut and Festus Ezeli, along with a solid small forward in Harrison Barnes. With that being said, it is not a stretch of the imagination to think that a team that possesses two MVP’s and five scoring titles have an extremely high chance of bringing another title home to Oakland. Will this star-studded roster be able to break their own record of 73 wins in a season? Only time will tell.

The Warriors' "Death Lineup" was best in the league.

Winner: Boston Celtics
Although they were unable to land the marquee free agent of the summer in Kevin Durant, the Celtics did land what could be considered their best free agency move in recent memory in Al Horford—something the Celtics have struggled to do in the past, according to Sean Deveny of SportingNews. The Celtics inked Horford to a four-year, $113 million dollar contract. Adding Horford to an already solid lineup could potentially allow for the Celtics to make it out of the first round of the playoffs—something they haven’t done since 2012. Horford’s ability to score and pass the ball should allow for a deadly pick-and-pop combo between him and Isaiah Thomas.

Loser: Oklahoma City
It has been a tough month or so for the Oklahoma City faithful. After watching their team lose in the Western Conference Finals after being up 3-1 and losing a superstar who basically built the team, you would think that things couldn’t get much worse…right? Well with Russell Westbrook indicating that he’s not going to sign a contract extension and the departure of Serge Ibaka, the future success of the organization is looking bleak. The unrest will continue into next summer as well in lieu of whether or not they can keep Russell Westbrook in OKC.

Loser: Atlanta Hawks
After losing arguably their best player in Al Horford, the Hawks tried to fill in the void by adding Dwight Howard to their roster. Howard has all the potential in the world to be a dominant big man, but with looming injuries and questionable work ethic, will Howard be able to come in and make a considerable difference? After losing their starting point guard and center, will the Paul Millsap and Dwight Howard be able to carry the load that will land the Hawks in the playoffs for a ninth straight season?