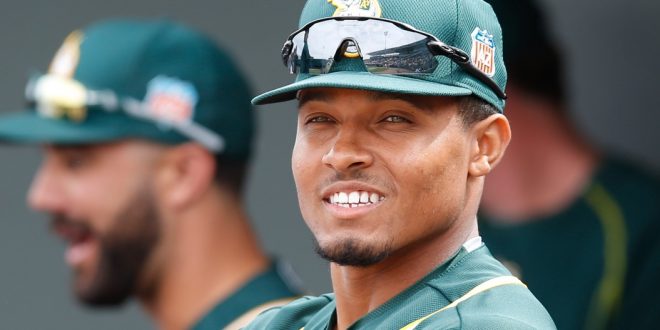 Richie Martin may be a major league prospect but he will always be a Gator first. Martin played for the University of Florida Gators for three years spanning 177 games.Martin had a solid career here at UF. His career numbers in 177 games at Florida included a .284 Batting Average with 136 runs 81 RBIS 45 Stolen Bases 27 doubles seven triples and seven dingers. Martin’s bat and speed is what led him to be selected 20th overall by the by the Oakland Athletics in the 2015 draft.

Martin talks about playing in the minors.

Martin is in the process of working his way up to the majors as he started his minor league career playing for the Athletics affiliated team the Vermont Lake Monsters in Short-Season A in 2015.  Martins batted .237 with 31 runs, 45 hits, six doubles, four triples, two homers,  16 RBI and seven stolen bases. It takes time to adjust to professional level baseball pitching. Martin on the difference in pitching between college and the majors.

Martin began the 2016 minor league season on the disabled list after suffering a meniscus injury while sliding. Martin underwent knee surgery in April and has since recovered to have a solid season thus far. Martin now plays for the Stockton Ports after moving to Class A Advanced.

So far he’s batting .246 with and on-base percentage of .323 and with one homer, 24 runs, 34 hits, four doubles, 12 RBI and five stolen bases. Martin’s elite defense continues as well with a .977 fielding percentage.

Martin will look to improve upon these numbers as the season goes along. Next up for Martin and the Ports is a two-game series against Lake Elsinore starting Wednesday night.