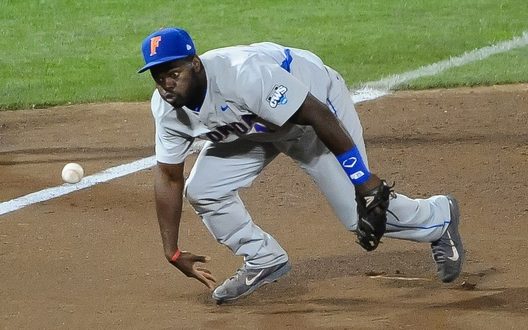 Josh Tobias has a history of moving up.

Tobias, who played the infield for the Florida Gators from 2012 to 2015, showed outstanding improvement, raising his batting average each year, starting with a .252 mark as a freshman and leaving his senior season with a .355 batting average.  He now is cashing in his ability to adjust and improve to pro baseball with the Philadelphia Phillies organization.

After being drafted in the 10th round  of the 2015 MLB draft by the Phillies, Tobias was assigned to the Class A-Short New York-Penn League. He play for the Williamsport Crosscutters in Pennsylvania for the rest of 2015 until this year when he was moved up to the Class-A South Atlantic League, joining the Lakewood BlueClaws, his current Phillies affiliated team.

In 2011, the Washington Nationals drafted Tobias in the 31st round, but he elected to join the ball club at the University of Florida. In his first year at Florida, a hand injury caused him to miss a month of the season; however he was the sole Gator to be selected to the SEC’s All-Freshman team. The Gators awarded him the Steve Georgiadis Award for overcoming adversity.

Three years later, Tobias’ career at Florida ended with a .301 batting average in 213 games, including 179 starts. He racked up 122 runs, 82 RBIs, 22 stolen bases and 11 home runs. Tobias fondly remembers his time at Florida, and believes that the coaches really helped prepare him for playing professional ball.

Tobias has experienced continued success in the minor leagues, as he was named an All-Star both in 2015 and 2016. He is currently batting .302 with 50 RBIs, six stolen bases, and seven home runs.

Fans in the minor leagues are high in number and very supportive, something Tobias also enjoyed while at UF.  He says crowds for Lakewood home games are very good and that fans have been very supportive of the team and of him personally.

Even with a welcoming fan base, it has been a transition moving from college to professional baseball. The opponent’s coaches are prepared, the pitches are faster, and the bus trips are longer. While his hitting stance hasn’t been adjusted much, the BlueClaw coaches are currently working on his skill set while moving back to second base after playing third base most of the time in college.

At second base he has a .961 defensive percentage, and he has also played some in the outfield. Tobias feels that the higher frequency of games takes more of a toll on the body, but there is one consolation to not playing college ball anymore; he doesn’t have to worry about tests.

The hope for Tobias is that he continues to progress in the minor leagues and he becomes another former Gator player who reaches Major League Baseball.