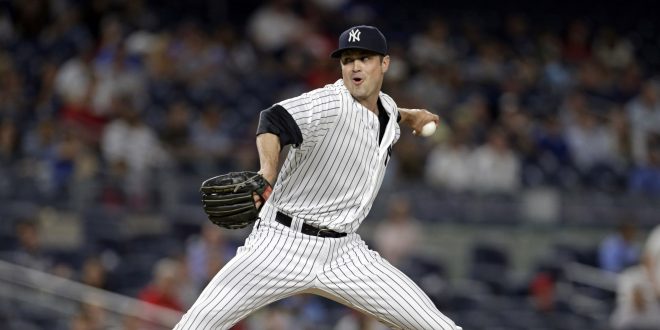 Gainesville native and former Buchholz pitcher Andrew Miller has been named to the American League All-Star team. The team’s roster was announced Wednesday and Miller is one of three Yankees chosen for the game. The 6’7″ lefty is 5-1 on the season for the New York Yankees and is sporting a 1.47 ERA and seven saves this season. In 2016 Miller also has recorded 66 strike outs in just 36.2 innings. Miller will join outfielder Carlos Beltran and reliever Dellin Betances in his first ever appearance in an All-Star game. Miller says that he’s looking forward to get his family out to San Diego and get his son on the field for the Home Run Derby, and he is just trying to enjoy the experience.

Incredibly cool to join @carlosbeltran15 and @DBetances68 in the #AllStarGame representing the @Yankees. A dream come true.

After attending Buchholz, Miller went on to play at the University of North Carolina Chapel Hill where his number 33 jersey has been retired. In 2006, Miller was named Pitcher of the Year and lead the Tar Heels to the College World Series. That same year he was drafted as the number six over all pick to the Detroit Tigers and made his first MLB appearance in 2006 as well. After being drafted, Miller has played for the Marlins, Red Sox and the Orioles before being traded to the Yankees in 2014. His All-Star appearance will add to his list of MLB accomplishments including being apart of the 2013 Red Sox World Series Championship team and being named AL Reliever of the Year in 2015.

Miller joined ESPN Gainesville’s Sportscene with Steve Russel on Thursday to discuss what being a Yankee and making the All-Star team means to him. Living in New York and playing for the Yankees has been a blast for Miller. He says there are so many Yankee fans out there but he still can go out to eat with out people recognizing him. Miller also talked about how great the closing rotation is for the Yankees, both him and Betances will be attending the All-Star game. Miller says that he loves playing in the AL East because there is such great competition but he is hoping one day he can look back and remember a championship.