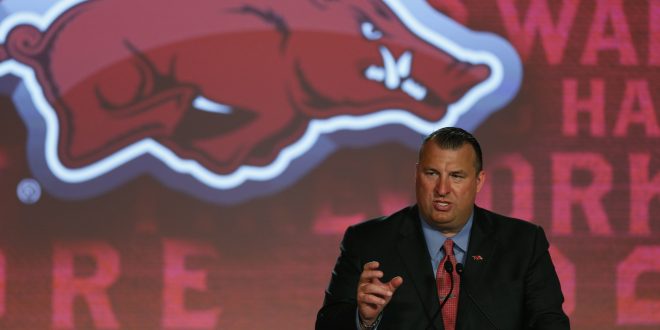 Bielema Hopes He Has Arkansas Football Heading In Right Direction

SEC Football Media Days continued today in Birmingham, Alabama and Arkansas coach Bret Bielema spoke about his team and the upcoming 2016 season. This will be Bielema’s fourth year with the Razorbacks after last season posting an  8-5 record and a 5-3 record in the SEC, a slight improvement from a 7-6 record and going 2-6 in the league the year before.

This year could also be considered a “rebuilding year.”  Five players were lost to the 2016 NFL Draft this past season including their starting quarterback Brandon Allen, running back Alex Collins, and tight end Hunter Henry. There are several who are in the running to be Allen’s replacement including his younger brother, junior Austin Allen, along with Ty Storey, Rafe Peavey, and Cole Kelly. Kelly a 6″7″ 256 pound true freshman from Lafayette, Louisiana has some high expectations this season from Bielema and his teammates.

Bielema has also been impressed with the freshmen running backs Revwah Whaley and TJ Hammands.

The Razorback defense has quite a few veterans with nine starters returning.  Senior Deatrich Wise led the SEC with eight sacks in conference play this past fall. Senior Brooks Ellis was ninth in the conference with 102 tackles.

The Razorbacks, had a rough start to the season with three straight losses starting with their second game of the season. They were defeated by Toledo, Texas Tech, and Texas A&M at the beginning of the season. Bielema knows that the Razorbacks can finish strong but he does not want those consecutive early season losses to happen again.

Another thing Bielema spoke on was players entering the draft earlier than needed. Bielema believes the NFL should allow players to test the NFL Draft waters and still have an option to return back to school, similar to college basketball.  With football it would be a little different because of the national championship in January and being unsure of what scholarships would be available. Bielema had a solution for that, he proposes somewhat of a combine before the NFL scouting combine in January. It would be  a few weeks after the national championship game, before players are invited to the official scouting combine.

The Razorbacks kick off their first game of the season at home on September 3rd in Fayetteville against the Louisiana Tech Bulldogs.