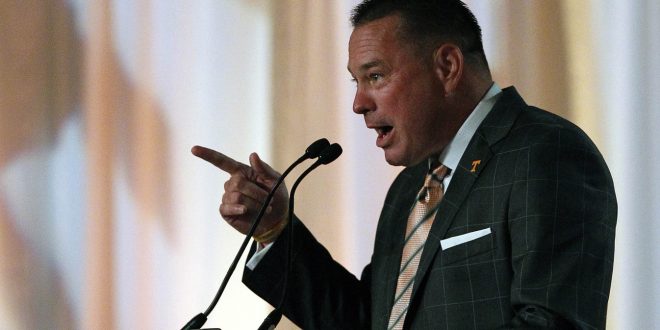 The Tennessee Volunteers were rather unremarkable at SEC Media Days in Hoover, Alabama. Understandably, they are waiting for the season to start winning games and proving the preseason projections right.

Various media outlets have already given the SEC East title to Tennessee, an early prediction based on Tennessee’s improvement and potential going into the 2016 season. Back in April, ESPN’s Power Football Index gave Tennessee a 57 percent chance to win the SEC East. This new found attention is not lost on head coach Butch Jones, who noted that the Media Days crowd was larger than years before. “I remember standing up here at the podium three short years ago, and the room was half-filled and nobody was talking about Tennessee football.”

After winning nine games in the 2015 season and beating Northwestern 45-6 in the Outback Bowl, the Vols return 19 starters. Tennessee got rid of defensive coordinator John Jancek and brought in Bob Shoop from Penn State.

Tennessee quarterback Joshua Dobbs was a player representative at Media Days this year, along with Jalen Reeves-Maybin, and Cameron Sutton.

Despite last year’s successful season, with the most team wins since 2007, one notable game hangs over the Vols’ head and will remain under the media microscope into the upcoming season—Tennessee’s devastating 28-27 loss to the Florida Gators. The game slipped from Tennessee’s fingers when they allowed what should have been a 4th-and-14 stop to become a 63-yard Florida touchdown with 1:26 left in the game. Their fate was sealed when they missed not one, but two, field goal attempts from 55 yards with three seconds left.

While Tennessee does have the longest losing streak in the series history, they have lost the last two games against Florida by just one point.  The Florida-Tennessee rivalry was discussed at Media Days, fueled not only by the high expectations for Tennessee, but also the comments made by some of Florida’s players the day before.

The representatives from the Volunteers were a bit more modest in their discussion of the rivalry. When asked if the Florida match up was the most important game of the season, Dobbs responded that every SEC game is important and that they’ll worry about Florida when the time comes.

Coach Jones addressed the recent $2.48 million dollar settlement of a Title IX lawsuit against the University of Tennessee. The lawsuit was filed by eight women against the school and the football program regarding a mishandling of sexual assault allegations involving student-athletes.

Tennessee opens the 2016 season on Thursday September 1 at home against Appalachian State. The Volunteers will meet Florida at home on September 24.