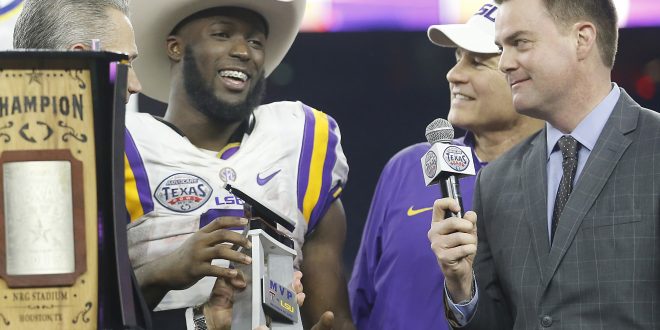 The Louisiana State University Tigers will enter the 2016 college football season with high expectations, but that’s nothing new to them. The Tigers have operated under head coach Les Miles for 11 years now and recently the Tigers have failed to meet the public’s expectations for them. It nearly got head coach Les Miles fired last year and Miles will likely remain on the hot seat for the majority this upcoming season. The Tigers seem to have all the pieces in place, a dominant running game, a stifling defense, a quarter back who appears capable, they just need to put it together now.

On offense the tigers will operate similarly to how they have the past two years- give the ball to Fournette. The Heisman candidate rushed for 1,953 yards and 22 touchdowns last season. Simply put, Fournette is one of those rare players who can single-handily win you a game. He will spend the season running, metaphorically, with his team on his back and, quite literally, with opposing defenses on it as well.

From there the offense gets a bit more interesting. LSU will return starting quarterback Brandon Harris  who completed 53.6 percent of his passes for 13 touchdowns last year. Harris has shown potential and big play ability but LSU will need more consistency from the junior QB; and there will be no shortage of help on the outside. LSU returns both Malachi Dupre and Travin Dural. Those two receivers combined for 71 receptions and nine touchdowns last season so their reliability and explosiveness will be a useful tool for Brandon Harris.

While the brains behind the LSU defense will be new this season, there should be no reason to expect the Tigers to take a step back defensively this year. New defensive coordinator Dave Aranda has a lot of tools to work with on his side of the ball as well as one of the better defensive minds in college football: new defensive line coach Ed Orgeron. LSUs strength is in the trenches where they will be returning the majority of the production that gave them 34 sacks last year which is good for 3rd in the SEC. That production comes in the form of Lewis Neal, Davon Godchaux, Arden Key and Tashawn Bower anchoring the defensive line for LSU. Kendell Beckwith who decided not to enter the draft will hold the middle as one of the best linebackers in the country and the Tigers will try and stake their claim on DBU by returning stud safety Jamal Adams and a deep position at corner back.

The LSU Tigers have a real opportunity to be a national championship contender this year, and that’s the only goal according to team leader Leonard Fournette. The only thing standing between the Tigers and their goal is their selves and a hellish schedule. The Tigers will open the season in Green Bay versus the Wisconsin Badgers but it only gets harder form there as they face a brutal SEC schedule that includes Mississippi State, Auburn, Florida, Ole Miss, Arkansas, Alabama and Texas A&M. The Tigers have their work cut out for them, but they’ve got the talent they need to achieve their goals in 2016 and 2017.