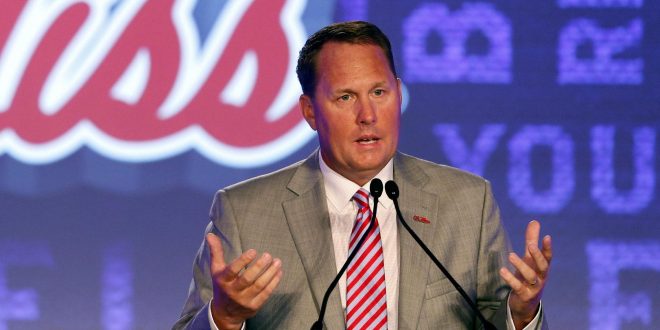 Freeze Talks About NCAA and 2016 Season at SEC Media Days

Ole Miss head coach Hugh Freeze took the podium on the last day of the SEC media days. On the field, Ole Miss had a successful 2015 season. They went 10-3 overall and 6-2 in conference play. Ole Miss is also one of the few teams to beat Alabama back-to-back years.

Going into the 2016 season, Ole Miss had a strong running game with the combination of Jordan Wilkins, Akeem Judd and Eric Sweeny. Freeze says Sweeny is a force to be reckoned with, even in practice. Another player that Freeze expects to have another productive season is defensive end Marquis Haynes. Freeze says that Haynes has come a long way since he first started and expects Haynes will be a conference leader again in sacks. Haynes ended last season with 10 sacks, tied for the fourth highest in the SEC.

The elephant in the room regarding the NCAA investigation into violations at Ole Miss couldn’t be ignored. Of the 28 alleged violations, 13 of them involve the Ole Miss football program. Nine of them since Freeze became the head coach. Freeze says that he believes recruiting won’t be affected, but reiterated they will be held accountable if things that weren’t done right. Freeze says the most frustrating part about the investigation is the length of it. As for the players, quarterback Chad Kelly says the players are focused on what is happening on the field.

Chad Kelly on leadership: "A high standard has been set at our university, and it's our job to pass the torch to the younger guys." #SECMD16

Looking forward to the 2016 season, Ole Miss will open their season against Florida State. Kelly says that the main goal of that game is simple, just be the team who scores more points. Kelly finished last season with a total of 4,542 yards, the third highest in SEC history. Kelly’s preparation this year has him working with the new wide receivers.

"I'm not worried about being the best QB in the SEC because my goal is to be the best in the nation." @ckelly_10 pic.twitter.com/DBs0uDOL77

Ole Miss will open up the 2016 season against FSU on September 5th in Orlando, FL. The game will be broadcasted on ESPN.

Senior telecommunication and history major at the University of Florida and contributor for ESPN Gainesville 95.3. Baseball and hockey are my favorites, but I love all sports.
@MichelleSpring6
Previous Muschamp Helps Close Out SEC Media Days 2016
Next LSU Looks To Capitalize On Its Opportunity