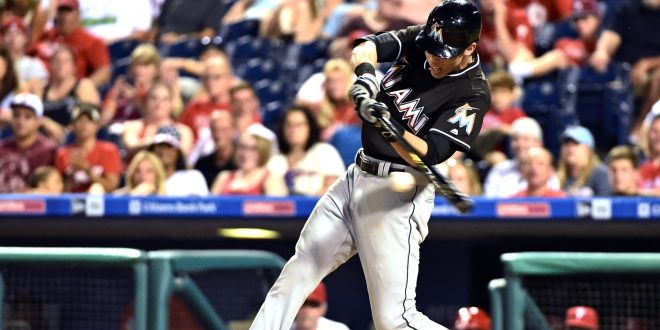 Its a good time to be a Miami Marlins fan. The Fish were on a tear before the All-Star break and seemed to pick up right where they left off going into the second half of the season. Miami has won seven of their last eight including three straight. They have already taken the first two games of a four-game series against the Phillies with each of those wins coming in extra innings.

Last night, Christian Yelich was the hero as he drove in both of the Marlins runs in a tight 2-1 game. Yelich opened up the scoring with a solo shot in the fourth. The 452-foot long ball was his 13th homer of the season. In the bottom half of the inning Tommy Joseph tied things up 1-1 with a homer to left field. This was the second straight game Joseph has homered.

Yelich seems to be unstoppable when playing in Philly. In 20 career games at Citizens Bank Park he is hitting an impressive .369.

Adeiny Hechavarria led off the top of the 10th inning with a double. With two outs and runners on first and second, Yelich stepped to the plate and roped a single to left field easily scoring Hechavarria giving the Marlins the 3-2 lead. AJ Ramos closed out the game to earn his 31st save in 32 opportunities. Ramos earned his third save in three days for the second time in his career.

With this win the Marlins improved to 51-42 putting them at nine games over .500. The last time Miami was nine games over .500 was back in 2011 when they were 31-22. More importantly the fish now have a one game lead over the Mets for the second NL Wild Card berth.

"Resiliency, always being in the game, always fighting back, never being out of it … We just gotta keep it going." pic.twitter.com/MDs90HRAr3

Miami is going for their fourth straight win tonight and looking to take game three of a four game set against the Phillies. The Marlins send left-hander Wei-Yin Chen (5-3, 4.90) to the mound to face Jeremy Hellickson (6-7, 4.03). Chen has struggled of late giving up at least four earned runs in five of his last seven outings. Surprisingly he is 2-1 in that span despite a 6.00 ERA.

First pitch from the city of brotherly love is set for 7:05 p.m.

Im a senior at the University of Florida currently pursuing a degree in Telecommunications. I work for ESPN Gainesville 95.3 and anchor the Monday sports broadcast for WUFT First At Five. Im from New York and an avid sports fan of all New York teams.
Previous Tampa Bay Rays Get Much Needed Win Over Rockies
Next Orlando City’s New Manager