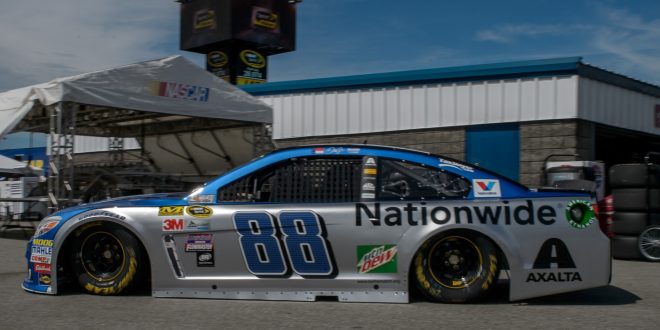 The Brickyard 400 is back at the Indianapolis Motor Speedway this weekend and the 23rd running of this race will be a memorable for racers and fans.

Most notably is that of the No. 88 car. Dale Earnhardt Jr. has not recovered from his concussion-like symptoms, so Jeff Gordon is taking the wheel for Sunday’s race. Earnhardt was replaced by Alex Bowman in last week’s New Hampshire race. Although there is no time table yet for his return, Earnhardt is sensing some improvement in his condition.

Today is the 1st day in many that I sensed improvement. Seen small gains during my physical therapy as well. Light at the end of the tunnel.

Gordon dove the famed No. 24 car for twenty-three years, this is the first time that he will be in a race not driving that car. Gordon has had success at the Indianapolis Motor Speedway; he is a five-time Brickyard 400 champion. The last time Gordon won at the Brickyard 400 was two years ago in 2014.

No. 88 crew asks @IMS to put @DaleJr's name back above their garage stall.

For Indiana native Tony Stewart, this will be his last Brickyard 400. Stewart finished second last week in New Hampshire, but has also had a few wins in Indianapolis. Stewart is a two-time winner at the Brickyard 400, most recently in 2007.

Senior telecommunication and history major at the University of Florida and contributor for ESPN Gainesville 95.3. Baseball and hockey are my favorites, but I love all sports.
@MichelleSpring6
Previous Charlotte Is No Longer The Home Of The 2017 NBA All-Star Game
Next Busch wins the Brickyard 400

NASCAR hosts 20,000 fans in the biggest crowd in pandemic history

Kevin Harvick won the Brickyard 400 for the second year in a row. It’s Harvick’s …