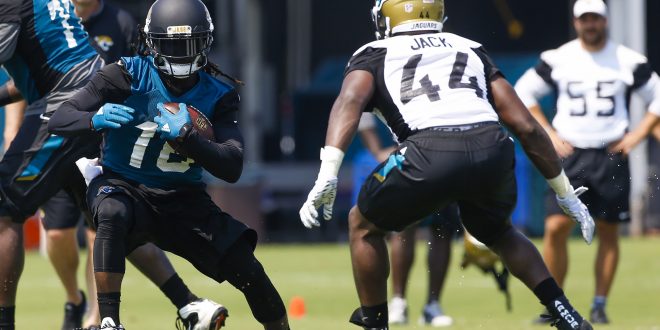 Training camp officially kicked off for the Jacksonville Jaguars at Everbank Field Thursday morning, leaving them 45 days to prepare themselves for the Green Bay Packers on September 11th. The quarterbacks and rookies have been here since Monday, the vets came yesterday, and the pads aren’t coming out until Tuesday. After spending $350 million in free agency in the past two years and a recent affinity for top-five draft picks, Big Cat Country is optimistic.

The Jags’ offseason revitalized their competitive edge in the AFC South with big names like defensive linemen Malik Jackson, defensive back Jalen Ramsey and linebacker Myles Jack. Not to mention that former Gator Dante Fowler Jr. and defensive tackle Sen’Derrick Marks are recovered from their injuries. Now its up to head coach Gus Bradley to blend all that young talent with the veterans. The position battles could be intense and one to focus on is at offensive tackle between Luke Joeckel and Kelvin Beachum for that starting position. T.J. Yeldon and Chris Ivory will compete for the starting tailback slot while Marqise Lee and Rashad Greene are fighting to be the better wide receiver. Sheldon Day and Michael Bennett could be the top two defensive tackles while James Sample and Johnathon Cyprien are competing at safety.

So where could these competitive pressures be of the most use for the Jags? They finished at #27 in the NFL power rankings for 2015. It’s safe to say that defense has been a problem for them in the past. In the last four seasons they disappointingly gave up 444, 449, 412, and 448 points. Offensively, they’re starting make headway with 2015 being their highest scoring season since 2007 with 376 points. All eyes were on Blake Bortles last season as the quarterback set the franchise record with 355 completions, 606 attempts, 4,428 passing yards and 35 touchdown passes. Now he has a new goal of bettering his passes by raising his completion rate above 60 percent and cutting down on his interceptions.

The next five weeks are critical to not only the Jaguars’ performance this season, but Gus Bradley’s future as a coach. In his first three seasons his record is 12-36. 2016 is time for him to deliver if he wants to stick around. But with this roster he has all the ingredients for success, and he already likes what he’s seeing. We’ll check up on their progress when they match up with the Jets, Bucs, Falcons, and Bengals in preseason.

The Jaguars open the regular season on September 11th when they take on the Green Bay Packers at home at Everbank Field.