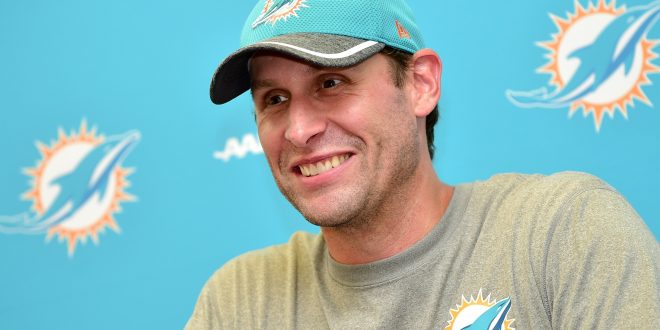 Share
The Miami Dolphins reported to training camp today and will hit the practice field on Friday.  The Dolphins look to improve upon last year’s disappointing 6-10 season finishing last in the AFC East.  New 37 year old head coach Adam Gase takes the reigns of the struggling Dolphins for his first year as a coach of any NFL team. He is the youngest head coach in the NFL. They have drafted some new talent from the NFL Draft in the hope of improving their weaknesses.  With many unanswered questions heading into the camp, Miami looks to improve and become a threat in the NFL.

We enter training camp with 89 guys on the roster.https://t.co/t4htt1eSHm

One of those draft prospects is offensive lineman Laremy Tunsil, the offensive tackle from Ole Miss.  With all the controversy surrounding Tunsil on draft day, Miami now hopes Tunsil will be part of a solution for an offensive line that has allowed 184 sacks since 2012, the most in the NFL.  A solid offensive line could help with the Dolphin offensive struggles as well as they averaged only 19.4 points per game, among the worst in the NFL.  Quarterback Ryan Tannehill has struggled at times but Gase shows his support. Tannehill passed for a total of 4,208 yards with 24 TD’s and 12 interceptions a year ago.

The Dolphins signed many notable free agents for aid on the defensive side of the ball.  They added Bryon Maxwell, Kiko Alonso, and Mario Williams.  Maxwell comes from the Philadelphia Eagles as a defensive back, racking up 64 tackles and 2 picks in 15 games last season.  Linebacker Kiko Alonso comes to Miami also from the Eagles and the Dolphins hope for a return to his rookie year form where last season he totaled 43 tackles and 2 interceptions while only starting one game.  Alonso’s rookie year he tallied 159 tackles, two sacks, and four interceptions with the Bills in 2013.  Former No. 1 overall draft pick in the 2006 NFL Draft, defensive end Mario Williams joins the party in South Beach coming from the Buffalo Bills.  Williams contributed 19 tackles and five sacks last season in 15 games.

With these new additions and a new coach the Dolphins look to make a splash this season.  They look to improve from their 6-10 season and find their way back to the playoffs for the first time since 2008.  They will kick off their season in Seattle against the Seahawks on the 11th of September.
Share