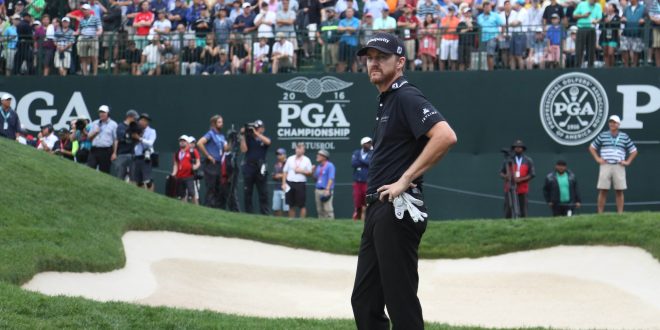 Jimmy Walker came to Springfield, New Jersey for the 98th PGA Championship as 48th in the Official World Golf Rankings.  But after winning the PGA Championship on Sunday, he left Springfield ranked 15th with a pay day of $1.8 million as well.  Walker won the tournament at 14 under par, one shot better than Jason Day.  Interestingly enough,  Walker’s win means the winner of the four major tournaments this year were all first time winners of major titles.

Walker has been on the PGA Tour since 2005 and has won six tournaments.  In the first part of his career he struggled to find a win but he broke through in the Frys.com Open in 2013.  Since then he has added himself as a winner at the Sony Open in Hawaii (2014, 2015), AT&T Pebble Beach National Pro-Am (2014), and the Valero Texas Open (2015).  None of these prior wins stack up to his win this weekend in the PGA Championship, his biggest win to date.

Walker has only found moderate success in major tournaments before this weekend; his best performances at major tournaments include tie for eighth in the Masters, a tie for ninth in the US Open, and tie for 26th at the British Open.

The Next PGA Tour event is the Travelers Championship in Cromwell, Connecticut starting this Thursday.