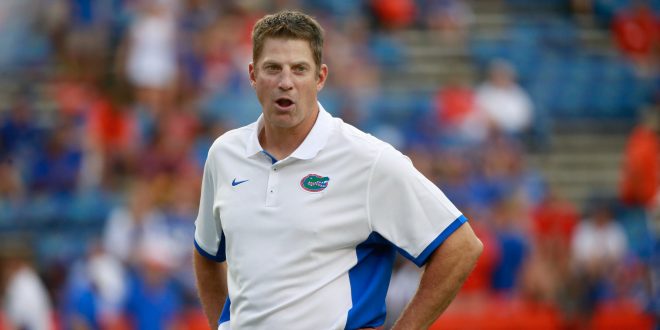 The Florida Gator football team kicked off their 2016 season Wednesday afternoon with media day. Head coach Jim McElwain, defensive coach Geoff Collins and offensive and quarterback coach Doug Nussmeier all took their turn at the podium to talk about the upcoming season.

Nussmeier spoke after the media had the chance to talk with some of the players. As Nussmeier heads into his second year as the offensive and quarterback coach at Florida, he says has high hopes for the upcoming season. Although he says last year may have been tough and the offense struggled a lot, the team overcame adversity and is excited to see what this season has in store.

One player who may be a game changer for the Gators offense is Luke Del Rio. Del Rio is a transfer student from Organ State and has been around football his entire life. Del Rio’s Father, Jack, is a former NFL linebacker and the current head coach for the Oakland Raiders. Nussmeier says, growing up around the game has been an advantage for Del Rio.

Though McElwain has not named who will be the starting QB for the Gators, Del Rio is definitely in the running.

However, the QB is not the only player on the offensive side of the ball and Nussmeier says the Gators are working on becoming a situational offense in every aspect.

"We wanna be a situational good offense. We really gotta grow in as a group" -Nussmeier on expectations for season #Gators

Coach Nussmeir and players will take part in their first official day of fall camp Thursday. Nussmeier says the confidence he has in coach Mac and the boys is what makes him sure this season will be successful.