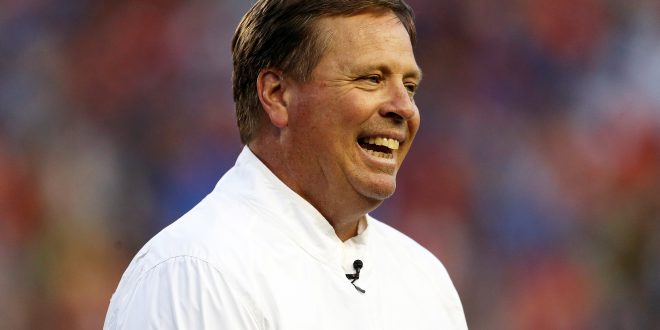 McElwain Excited for Practice to Get Started

Head football Coach Jim McElwain started off saying that he  “feels really good about where these guys are.”

The Florida Gators won the Eastern Division of the SEC and went 10-4 for the season in McElwain’s first season as coach. The Gators last season, got a taste of success, but in 2016 they start with a clean slate. With two new quarterbacks, Luke Del Rio and Austin Appleby, who have never even played in an official game for the Gators, McElwain knows that the QB spot is up for grabs.

In the QB battle McElwain says that both Appleby and Del Rio are factors. “Their ability to do things willing to work with other guys on the team as well, both bring things to our team that really help”

He also feels that in the quarterback position everyone around the position needs to trust the QB.

However, he is excited for the competition, not just with the quarterbacks but with all positions. McElwain is also excited to see what the players have learned in spring, summer and now into the fall. With finals ending this week for summer classes, some players’ practice schedules will be altered, but he wants to take the older guys first through practice and then have the younger players out, to teach them the expectations that come with being a Gator football player.

McElwain has also made it clear that he does not want to push any injured players after their surgeries like Alex Anzalone (shoulder), Martez Ivey (shoulder). Other injury Gators include Kalif Jackson (knee) and Case Harrison, but those two are likely to join practice again when school starts at the end of August.

Injuries however, have held some players back ending their football careers, but they will still be able to finish their academic careers. McElwain announced that Thomas Holley and Andrew Ivey will be allowed to finish their education at UF with a medical hardship, without counting against the team’s 85 man scholarship allowance.

Media day in the the books! 🎥📷#GatorsCamp hits the field tomorrow. pic.twitter.com/SldGs5857m

With criticism last season on the offensive line, Coach McElwain wants to challenge the players and believes that the experience up front will definitely make a difference this season.

When asked about now sophomore Antonio Calloway who was suspended this past year, McElwain stated that “there are no changes in the status, he’s back with the team, but there isn’t a time frame on that”.

McElwain spoke on the tight end spot being important this year with the spot of sixth year senior Jake McGee being open.  The spot”needs to be a factor for us to get the ball vertically down the field” C’yontai Lewis and DeAndre Goolsby look to compete and fill those spots. McElwain is excited for those guys to compete as well.

With the freshmen Tyrie Cleveland and Rick Wells getting into some trouble earlier this summer for firing BB guns at their dorms, McElwain says that there is a “freedom of choice” and these players have faced consequences. Although, they will be available to practice.

With Treon Harris also facing some trouble last year on and off the field, he has decided to transfer.

“His choice to move on to get a fresh start, and we wish him the best and support him in whichever way we can” McElwain said.

“Having him back is a true spark”

Despite Calloway’s status still being in limbo, the Gators have many options on the wide receiver chart. There’s Powell, Ahmad Fulwood, Chris Thompson, and CJ Worton.

Fulwood was praised by McElwain for a good spring, but says that he needs to “really step it up in his play and be aggressive”

McElwain also stated that the running back position might be the strongest position for the Gators with Jordan Scarlett, Jordan Cronkrite, JUCO transfer Mark Thompson, and Ocala native Mark Herndon. The biggest change with Cronkite and Scarlett from last year is understanding the daily pounding.

McElwain is also impressed with Jalen Tabor this year and has seen more growth with him than anyone else in the program.

With seniors Jarrad Davis and Marcus Maye returning back to the program, he hopes that they provide leadership to the team. They both decided to return for their senior seasons, as they promised their moms they would graduate.

Coach McElwain is also excited to have Coach Spurrier come back to the University as an ambassador.

McElwain excited that Spurrier is on "our" team

The first day of fall camp was noon on Wednesday where the players reported. The start of preseason practice is set for Thursday.

Coming off a tough loss last Saturday against South Carolina, Florida had not only fans, …